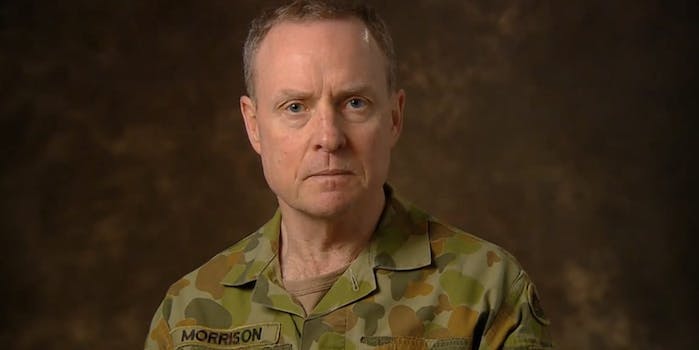 If you clenched your fists after Sen. Saxby Chambliss attributed the U.S. military’s staggering rate of sexual assault to “hormone levels,” or after Jeffrey Krusinski, the officer put in charge of the Air Force branch of the Sexual Assault Prevention and Response program, was arrested for alleged sexual assault, then this video from Australia’s chief of Army is a goddamn breath of fresh air.

In a YouTube response to accusations that 17 officers in his ranks distributed “highly inappropriate” images of female officers via email, Lieutenant General David Morrison stresses his belief that the military must be a place of tolerance and equality. (As many commenters noted, he only appears to blink twice.) In just three minutes, he gives a speech that touches on so many issues our military has failed to address, without the condescending we’re-looking-into-it undertones. The mic-drop moment:

“On all operations, female soldiers and officers have proven themselves worthy of the best traditions of the Australian Army. They are vital to us maintaining our capability, now and into the future. If that does not suit you, then get out. You may find another employer where your attitude and behavior is acceptable, but I doubt it.”

He goes on to say he will be “ruthless” in rooting out soldiers engaged in similar activity, and states, “The standard you walk past is the standard you accept.”

So, when might we see military personnel in America standing up for women? The U.S. military’s culture of assault and misogyny is tied up in its unbalanced power structure, and transparency is not part of it. The fact that Facebook pages littered with jokes directed at military women stayed up for three years is just one part of the problem.

Female senators have started pushing for legislation to change how sexual assault cases are dealt with, but it speaks volumes about our culture that no one in a position of power, like Lt. Morrison, has looked the problem in the eye.

Perhaps this will be a wake-up call.