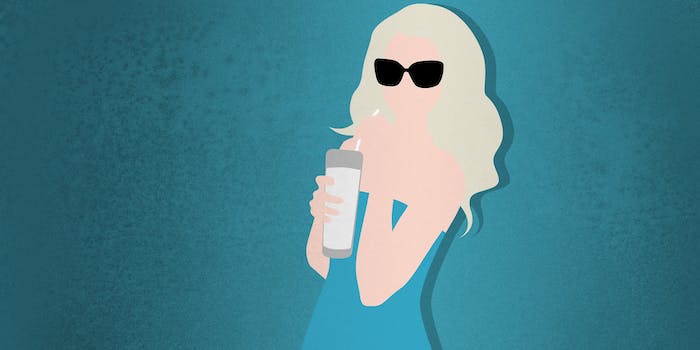 Dear Aunt Acid: How do I stop being a ‘Frozen’ Elsa and be a vulnerable, romantic sap?

In our new advice column, Aunt Acid tackles what it takes to be open yourself up to rejection—and love.

Life in the internet age giving you indigestion? Try “Aunt Acid,” a monthly advice column, formerly at the Toast. The role of Aunt Acid is played by Brooklyn-based know-it-all Ester Bloom.

I have a dating problem, and it’s the opposite of what many of my friends seem to have! Google is no help, I feel so alone in this. I would love your wisdom.

Some context: My friends talk about how they’re tired of pouring their love and energy into relationships with cold, indifferent partners. They want actual commitment and devotion and love and flowers and all of that. My problem is…I am the cold, indifferent partner. I want someone who inspires me to pour love and energy into them. I have no shortage of people who want to love me, but I can’t seem to give it back. I’ve dated many people who were absolutely amazing and loving people who would have done anything for me. But I left them all.

I used to think I was just choosy, and I am. But it goes deeper than that. I ghost people for no reason, I hate labels, hate introducing people I date to my friends, hate mushy Facebook posts. I’m very ready to cut and run from relationships the moment they wobble. People I date always feel needy and anxious to me, and want to move the relationship forward faster than I do. As you can probably guess, I am excellent and practiced at setting boundaries.

I’m not a-romantic, though. I want a life partner, I want children, I want love. I have been in one amazing relationship (which I left), and through that experience, I’ve had a taste of how good love can be. I want someone who inspires those feelings of love and respect and devotion in me. I want to be a giver of love, not just a recipient.

It’s a strange spot to be in as a young woman. I’ve tried searching online, but I just find articles with titles like “Is your man emotionally distant? How to spot the signs and leave the jerk.” There’s nothing geared at people like me. I feel like in my early twenties I’m supposed to be crushy and piney and get my heart broken. I used to think I would grow out of this and learn to love, but it doesn’t seem to be happening. I don’t want to be distant, I don’t want to be a jerk, I want to feel soft and vulnerable rather than prickly and wary all the time. How do I change?

(You didn’t provide a nom de plume so I’m going to give you one.)

First of all, Elsa, what you want is possible. You’re not asking for anything unreasonable, or even anything odd. You’d like to feel connected, in a deep, long-term way, to another human being, and you haven’t yet. That’s OK. I understand why you feel like an outlier, thanks to what you perceive to be your own lack of sentiment: You’re an integer in an age of emoticons. But romantic love is what used to be the outlier.

In the grand scheme of things, human beings have only been choosing their own life partners for a matter of moments; in fact, in many parts of the world, arranged marriage remains the norm. (Sometimes it’s even quite successful.) Western countries started festishizing romantic love in the 20th century through pop songs, movies, and ad campaigns, because it served a capitalist purpose: It got people, particularly young people, to buy things. Remember Don Draper’s famous exchange with Rachel Menken in “Mad Men”?

“The reason you haven’t felt it is because it doesn’t exist. What you call ‘love’ was invented by guys like me to sell nylons.”

Our romantic ideals are recent inventions, and the notion that they should inform everyone’s life choices, rather than just those of the idle rich, is more recent still. However pretty our romantic ideas are in theory, though, they have a shoddy track record in practice. If you’re uncomfortable with them, you’re hardly the only one.

No matter how many “likes” they get, mushy Facebook posts are worse than mushy apples to almost everyone except the couple in question. Most of us avert our eyes from the PDA in our instagrams. We may “heart” what we see, because we don’t want to hurt our friends’ feelings, but really we’re scrolling past even faster than we scroll past someone’s 14th straight cat photo or 22nd sunset.

So, even when the whole world seems like one long Flash animation filled with clipart flowers and bunnies and your eyes are watering with annoyance rather than heartfelt tears, remember that you are not alone.

While you’re remembering that, here are some other things to keep in mind:

You’re still too young to be despairing that something’s wrong with you because you haven’t yet felt head-over-heels for someone. Many people don’t fall in love for the first time until they’re in their 20s. You could be right on schedule.

You have plenty of pop culture company.

Your instinctive resistance to romance isn’t just reminiscent of Elsa from Frozen and Rachel Menken of Mad Men. Your Sense, Not Sensibility sorority would include plenty of Shakespeare’s more rational heroines—Beatrice from Much Ado About Nothing, Katherina from Taming of the Shrew, Portia from Merchant of Venice—all of whom lasted longer and fared better than Juliet. Jane Bennet of Pride and Prejudice would pledge (“her heart was not likely to be easily touched”), as would Lizzy; it’s their impulsive, hedonistic sister Lydia, after all, who gets the whole family in trouble. Dorothea Brooke. Sei Shōnagon. Shug. Coffy. Katniss. These are the women you want to be friends with, right? Not Anna Karenina or Madame Bovary. And these aren’t merely some of the most interesting and memorable women of pop culture; they also form great relationships, most of them. Eventually.

All of this is to underline that there’s nothing wrong with you. What’s wrong is that our culture has led you to believe you’re a freak for not going googly-eyed the moment you turned 16.

You have a lot working for you.

Let’s say that you’ve absorbed the lesson that nothing is wrong with you, but you’d still like to make some adjustments so as to feel more open to love, should the right person come along. The next step is to interrogate the pattern: that means figuring out both where it comes from and how it has served you up until now. Fear has a purpose, right? It keeps you safe. You can respect how your pattern has helped you even as you start trying to shift it around. Going so far as to even thank the pattern can help you a lot in successfully changing it.

So how has this pattern served you? Maybe, as a person who prefers being in control, you’ve been scared of feeling vulnerable ever since you were a kid, so you’ve trained yourself to either turn your crushes off quickly or to avoid them altogether. If that’s the case, you can practice letting yourself feel vulnerable in more low-stakes, non-romantic contexts, like by trying something you’re not good at. Join a team sport. Take an improv class. Ride some roller coasters.

Don’t just say it’s OK to fail; really let yourself experience the fact that you can make a fool of yourself and still be OK. That you can fall down without falling in anyone’s estimation, even your own.

“Even when the whole world seems like one long Flash animation filled with clipart flowers and bunnies, and your eyes are watering with annoyance rather than heartfelt tears, remember that you are not alone.”

Maybe your instinct to reject other people is rooted in a fear of being rejected yourself. That’s about as natural to humans as an affinity for trees. You can practice experiencing rejection in nonromantic contexts—submit a story, enter a contest—and then scale up to romantic ones. Ask someone out via a dating app. Ask lots of people out, as long as they seem generally decent, interesting, and attractive. The point isn’t to find your mythical soulmate; it’s to get accustomed to putting yourself out there, to normalize the experience of having someone say no to you for a change.

One last thing: Maybe you’re feeling cool towards potential romantic partners because you’re subconsciously choosing the tepid over the super-hot. Why would someone do that? Well, maybe because they don’t feel great about the kind of people they are actually drawn to. Maybe they don’t want to acknowledge that they are attracted to nerdy boys, or tough girls, or Kate McKinnon in Ghostbusters. (Nerdy and tough!)

Flip back through your memory, your diary, and your sex dreams for the people, real or imaginary, who have gotten you excited. What do they have in common? How can you pursue people who share that trait in real life? Figure it out, give yourself permission, and then start going after what you really want.

Just remember: Change takes time and it’s often painful. Your experience of yourself as someone who’s prickly and aloof has carved a deep groove; it’s going to take a while to carve a new one, and in the meantime, you may well find yourself falling back into that ditch. Be honest with your prospective romantic partners, especially anyone you feel a glimmer of real feeling for, that you’re still learning how to be open and available. Ask them to be patient with you. Ask them for compassion. And be compassionate toward yourself, too. Change is hard work, but it’s usually the only kind of work worth doing.

Have a question for Aunt Acid? Email her at [email protected].

Ester Bloom wrote the advice columnist 'Aunt Acid' for the Toast. Her writing has also appeared in the Atlantic, Slate, Salon, Vulture, Flavorwire, the Nation, and Talking Points Memo, among others. In October 2016, she joined CNBC as a senior editor.