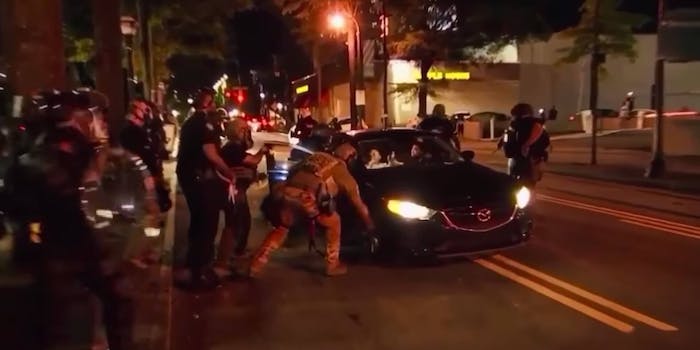 The woman was driving back from George Floyd protests.

Two Atlanta Police Department officers have reportedly been fired for using excessive force after video showed them dragging a man and woman out of a car, tasing the man, and kicking him on the ground.

Video shared by CBS46 journalist Brittany Miller showed two officers running up to a car. The people in the car have been identified by CBS46 as 20-year-old Taniyah Pilgrim and her friend 22-year-old Messiah Young from two historically Black colleges in Atlanta: Spelman and Morehouse.

According to CNN, the two were driving back from the protests for George Floyd on Saturday. At the beginning of the video, two officers in what appears to be heavy military gear run-up to the car, which is stuck in traffic, and both Pilgrim and Young are seem to be caught off guard.

Meanwhile, Pilgrim appears to open her door and the car starts to move as other cars in the lane started moving. But the car is then halted, while a crowd of almost a dozen officers in riot gear swarms the spot around the car. One officer punctures the front wheel on Pilgrim’s side.

One of the officers is seen dragging out Pilgrim and then using a taser on Young, who is still in the driver’s seat. One of the officers manages to open the door from his side, pull him out, and push him to the ground—kicking him repeatedly.

A few seconds later, the camera catches up with Young and Pilgrim, who are seen being cuffed.

“It was the worst experience of my life,” Pilgrim reportedly told CNN.

It’s not clear why the two were stopped while sitting in traffic, or why they were dragged out, and their windows smashed, and their tires punctured. One officer wrote in the police report that he used the taser because he believed the two were “armed,” according to CNN.