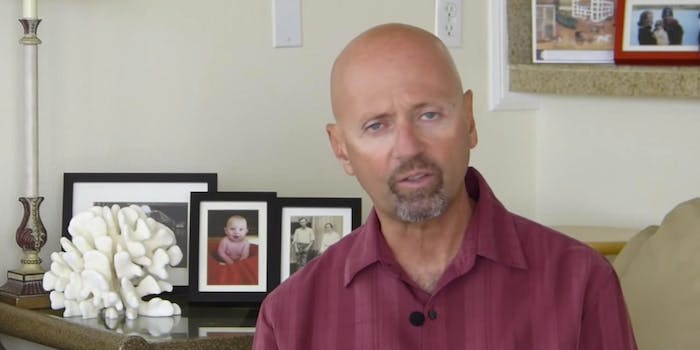 Faith healer suing atheist vlogger after being called a ‘swindler’

Atheist vlogger Stephanie Guttormson, who holds the impressive position of operations director for the Richard Dawkins Foundation, posted a video to YouTube in December that viciously tore apart the claims of Adam Miller, a self-proclaimed faith healer:

As you can see from the video’s thumbnail, Guttomson really took no prisoners. Now, five months later, Miller has decided the video went too far. He’s fired back by filing a lawsuit against her, saying:

“We are going to seek the maximum penalty by law, for copyright issues, and many other criminal actions that this individual has taken toward a very holy work.”

There’s a lot of other great material in his video response, which has the tone of, say, animal tranquilizers:

Guttormson’s original attack is a poorly recorded video that’s filled with definitions of stuff like the word “miracle” posted on the screen, and statistics that are, arguably, not relevant when you’re dealing with somebody claiming to be faith healer. (In general, any argument between an atheist and a faith healer is going to look a lot like a never-ending game of Pong).

Her video only has a total of 6,000 views—a large portion of which have come after Miller’s rebuttal.

Interestingly enough, Miller’s website (along with all his videos, methods, and testimonials) is currently down, which means it’s likely that a lawyer has spoken to him and told him that, if he’s going to aim for any sort of defamation suit, it’s best that he hide all his past claims.

The copyright portion of the suit probably won’t hold much water, because we’re talking about YouTube footage being used in another YouTube video. If that suit went in his favor, YouTube would most likely explode and cease to exist.

Still, the suit is indeed real—Guttormson has been served—and she’s set up a GoFundMe page to help cover her legal costs. She’s also included the court filings on the page, which can be read here. She’s aiming for $10,000 for her defenses.

Editor’s note: This story has been edited for tone and clarity.