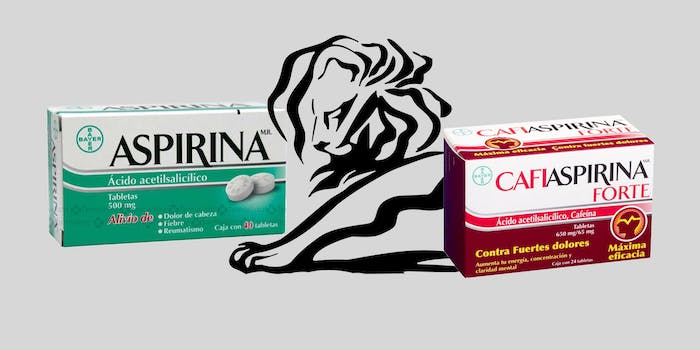 And it won a Cannes Lions award.

Did you ever see that scene in What Women Want where Mel Gibson thinks the way to sell aspirin is through the tagline “Advil: So mild and gentle, you can take it even when you’re faking a headache”? And when you did, did you think to yourself, wow, why isn’t there a real-life aspirin ad that suggests women are only ever coerced into sex?

Good news! There is one, and it won bronze in the Outdoor Ads category at Cannes Lions.

The ad is part of a series around the theme that people are lying, with the other two being: “It’s OK, I’m not taking any notes” and “Relax, it’s not like this is being recorded.” And while those are both disturbing in their own ways, the “babe” and mention of filming in the first one are what make it suggestive that a man is taking advantage of a woman sexually.

(The Daily Dot has reached out to AlmapBBDO and Cannes Lions about the campaign, but has not heard back of this posting.)

“That this ad could advance through all the layers of advertising vetting and still get greenlighted, and then go on to win awards, demonstrates how testosteroned that industry remains,” says Carrie Goldberg, owner of C.A. Goldberg, PLLC, a law firm focused on online harassment and sexual assault, and a board member at the Cyber Civil Rights Initiative.

She notes that filming sex without consent is a crime in 34 U.S. states and Washington D.C., and a federal crime in several countries. She also emphasizes that 93 percent of victims report severe emotional distress from its distribution. “So, this injury is not a take-two-tylenol-and-call-me-in-the-morning kind of thing,” she said.

Goldberg also points out that it’s pretty galling that a Brazilian ad agency was awarded for this ad, given the details of a recent rape case in the country. In May, a 16-year-old girl said “she was doped after going to her boyfriend’s house and woke up in a different house, surrounded by 33 men.” Six men and a minor are being charged for raping her and online distribution of a video and photos of the assault.

A look at the Cannes Lions 2016 jury shows a male-leaning-but-mixed jury of men and women, and in their Jury Manifesto, it writes, “the purpose of Cannes Lions judging is to identify creatively courageous work and inspire more.”

But it doesn’t mention the social responsibility of preventing ads that make light of nonconsensual pornography from the winner’s circle. Then again, the fraudulent I Sea app was also nominated, which indeed was pretty creative—even if it was totally fake.