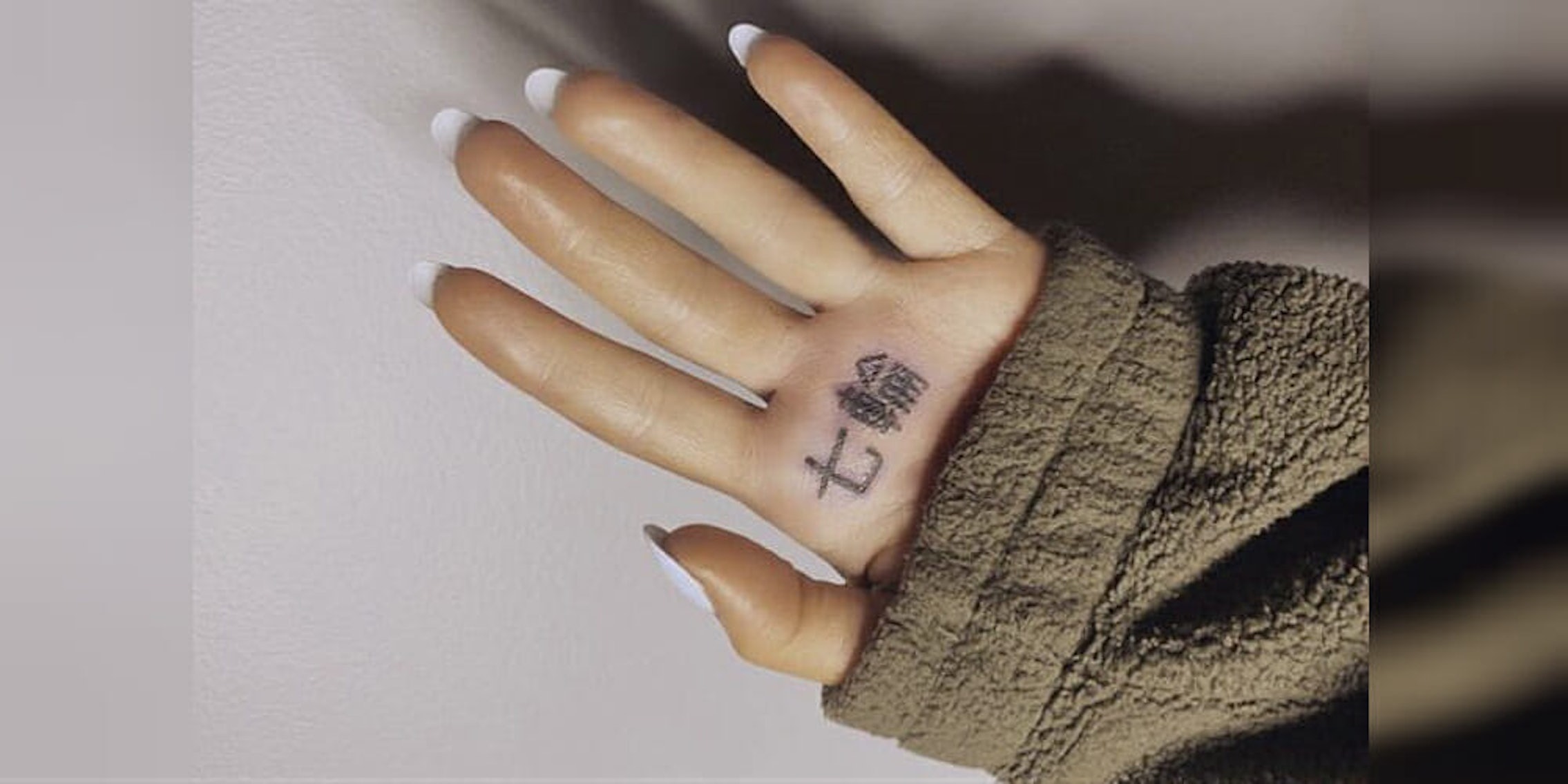 Ariana Grande has joined the less-than-illustrious history of people getting tattoos in foreign languages which, when translated, say something completely different than they expected. The pop star’s latest single, “7 Rings,” took the No. 1 position on the Billboard Top 100 recently, and to celebrate, Grande decided to get a tattoo in the song’s honor.

The title card for the “7 Rings” music video has the title in both English and Japanese Kanji, which reads as “七つの指輪.” Grande decided to get “7 Rings” tattooed on her hand in Kanji but made a serious error. Rather than the full phrase that was used in the music video, Grande just had the characters for “seven” and “ring” tattooed on her hand, but those characters mean something very different together. According to BuzzFeed, “七輪” doesn’t translate to “7 rings” it translates to shichirin, which is a small charcoal grill used for Japanese BBQ.

Grande deleted pictures of the tattoo from her social media, but not before people took screencaps and started roasting her.

Although she deleted the pictures of her tattoo, Grande did respond to one Twitter user who called out the mistake. “i [sic] left out ‘つの指’ which should have gone in between. it hurts like fuck n still looks tight. i wouldn’t have lasted one more symbol lmao,” she wrote.

While some see Grande’s tattoo as an embarrassing, but harmless, mistake, others have said that it is a sign of Grande’s cultural appropriation. According to critics, Grande’s response that her tattoo “still looks tight” shows that she sees Japanese culture as an aesthetic to borrow from, and doesn’t respect it enough to try to get the language right.

ariana grande’s dumb ass got a tattoo of an entree and has the audacity to be like o lol i didnt want to sit thru it bc it hurt uwu so basically u care about the aesthetic of kanji but not the meaning of the words?? “indeed” pic.twitter.com/bhCvrEVZuf

Grande didn’t seem concerned about the mistranslation, and even suggested she might fix it, writing, “this spot also peels a ton and won’t last so if i miss it enough, i’ll suffer thru the whole thing next time.”