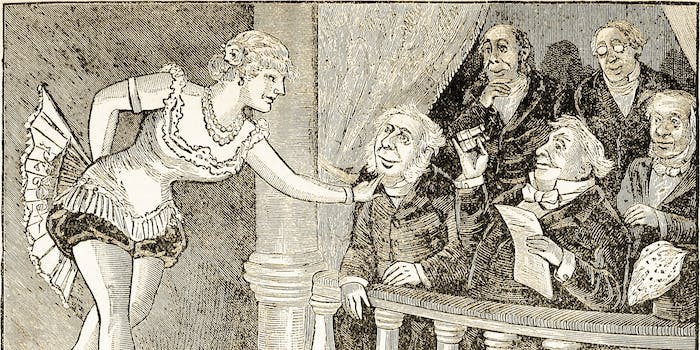 Has any one of these men even seen an orgasm?

The female orgasm! Or really, the clitoral/vaginal orgasm. For centuries men have ruminated on its mysterious ways. Where does it come from? Why does it exist? Is it even real? Nobody knows! I mean, women probably do, but why would you ask them when there are men to interrogate?

Earlier this week, VICE U.K. republished a VICE Serbia piece asking men in Belgrade what they thought a woman’s orgasm feels like, and they came up with answers that make us question if they even know what an orgasm is. Some choice selections:

What on earth is going on here? Save for that last honest hero, it sounds like they interviewed a handful of virgins. Has anyone here ever had an orgasm? Witnessed an orgasm? Why techno?

It would be one thing if this random selection of men just had no clue what was going on, but if you Google anything along the lines of “men describe female orgasm,” so many articles come up. Here’s one from Thought Catalog, where one guy says it has to be “much more spiritual, meaningful, soulful, and healing than the male equivalent.” Here are a bunch of guys on BuzzFeed trying to represent women’s orgasms with pipe cleaners.

Aside from the general issue of describing any physical sensation accurately (Try to describe what sneezing feels like; I’ll wait), these sorts of articles contribute to the idea that women are fascinating, mysterious, and, above all, different from men. Women’s orgasms are elusive, while men’s are concrete. Men’s are so much the standard that they are boring, while women’s are exciting exercises in metaphor.

When you actually compare pieces where men and women describe their own orgasms, there’s a lot of overlap. On one Reddit thread, a man compared it to a satisfying release after a lot of pressure has built up, and women on Thrillist use similar language. Both men and women compare it to being on a roller coaster, the build up of tension, and feeling like you get to pee after holding it in for a long time.

Orgasms are a personal experience, and even if you could put the feeling accurately into words, it would probably feel different for everybody. But it definitely doesn’t feel like techno music. C’mon, dude.