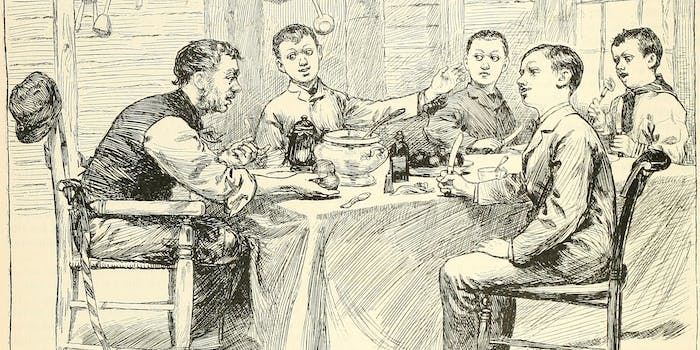 The food subscription service for MEN ONLY.

Subscription boxes have taken the Internet by storm. From Blue Apron to Naturebox to “bourbon of the month” clubs, there is no shortage of ways to get the exact food you want delivered to your door. But what if you’re, you know, a man? For that, there’s Mantry.

Mantry is the food delivery for men, a service hinted in their tagline, “Food for Men.” “The definitive destination for modern men looking to discover American artisan food and how to cook and entertain with it, Mantry is an engaging food lifestyle resource,” they write on their site. It features food that men like—bacon, sriracha, jerky. And it is all “artisanal,” with 1 percent of the proceeds go to City Harvest, a fantastic charity that “rescues” food from greenmarkets and restaurants and redistributes it to hungry families.

Mantry declined to comment to the Daily Dot about why artisanal food needs to be coded as masculine, but the choices they make reveal a deeper truth about who is socially allowed to eat what. A Mantry box is full of whiskey-based sauces and syrups, pork rinds and other fatty meats, and anything spicy. Bold, intense, a little scary—just what we expect men to be.

A Mantry box is full of whiskey-based sauces, pork rinds, and anything spicy. Bold, intense, a little scary—just what we expect men to be.

In a study from Pennsylvania State University—the one often cited by that guy mansplaining to you why you wouldn’t like the porter he’s drinking—men reported liking intense, spicy food more than women. However, things got weird when the study got specific: When both genders actually ate spicy food, women reported enjoying the sensation of the burning capsaicin more than men, even if the men said they were spicy food fanatics.

“It is possible,” the authors of the study said, “that the cultural association of consuming spicy foods with strength and machismo has created a learned social reward for men.”

It’s not hard to imagine that machismo translates to food, whether it’s the burn of a shot of bourbon, the punch of peppercorn bacon, or the sour pucker after eating a bar of the darkest chocolate. If those are the foods and flavors associated with manliness, then women get the delicate delights of salads, sweet drinks, anything low in measurable fats. Men don’t need to calorie-count because a man’s value is not tied to his body in the same way. Men don’t need to worry about how pork rinds will make their farts smell. Women don’t fart. They emit summer-breeze freshness.

It’s almost too obvious to point out that plenty of women like bacon and bourbon and plenty of men like salads and tiki drinks. The issue is not with putting chorizo and spicy maple syrup and buffalo jerky in a box—I’d eat the hell out of everything in that Mantry. The issue is that by saying the service is for men, it suggests that its contents are for men. They’re not. They’re for anyone who likes sriracha popcorn and fancy bitters, both of which sound delicious.