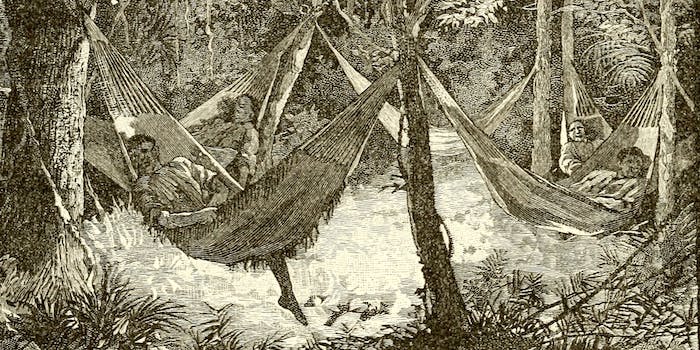 If 'mancation' is not your thing, you can take a 'dudecation' or a 'mantrip' instead.

You would think that by now the “mancation” would be over. If the 2012 Vince Vaughn movie didn’t do it in, surely the Wikipedia page would have signaled the end of an era. And yet, in 2016, the “mancation” is still going strong.

A “mancation” is basically what it sounds like—a vacation for men only. But of course, it’s not just that, because otherwise it’d just be called a “vacation” and we wouldn’t be here.

What makes it a “mancation” is the essence of heterosexual manhood (so this all-male gay resort in Fire Island doesn’t count). The destination and activities have to center around manliness in some way. The mancation is rugged. It’s fishing, camping, gambling, beer and mountain biking, and, of course, strip clubs. There will be no spas, no meditation, and certainly no women (besides the ones in the strip clubs). The whole thing ends up with this air of the He-Man Woman Haters Club, as if even sharing a name with something women do would taint the whole endeavor.

The mancation occasionally goes by other names, like “mantrip” or “dudecation,” and there’s even a website dedicated to the experience. But stripped of the manly branding and the assumption that hiking and gambling are inherently masculine (and, conversely, that enjoying a day at the spa isn’t), there’s nothing particularly egregious about the mancation.

But it can’t just be called “hanging out” because men are having a hard time admitting they like hanging out with other men. According to some studies, male same-sex friendship is rare. Men have friends, but are less likely to express emotional intimacy than women, in large part because it’s not as culturally encouraged. Psychiatrist Dr. Jacqueline Olds told the New York Times that “men’s friendships are more often based on mutual activities like sports and work rather than what’s happening to them psychologically. Women are taught to draw one another out; men are not.” If taking the guys on a whitewater-rafting trip is a pathway to emotional vulnerability, then go for it.

However, that makes the “mancation” a fix for just one symptom of a deeper problem, and one that is not without its own issues. Firstly, many of the “mancations” advertised do not appear promote any deeper emotional bonding (not that they have to). Secondly, they run up against the sticky question of opposite-sex friendships.

Just so we’re clear, straight men and women can be friends. The question of whether they can’t be is not so much about a hard truth of attraction as it is about cultural norms and expectations. We’re taught that friendship doesn’t work if it’s someone of the same sex we’re attracted to—which shuts people off to half a population of friendships. A “mancation” may not directly have anything to do with that, but it reinforces those expectations.

If anything, can we please include the gay mansion resort under the “mancation” umbrella?