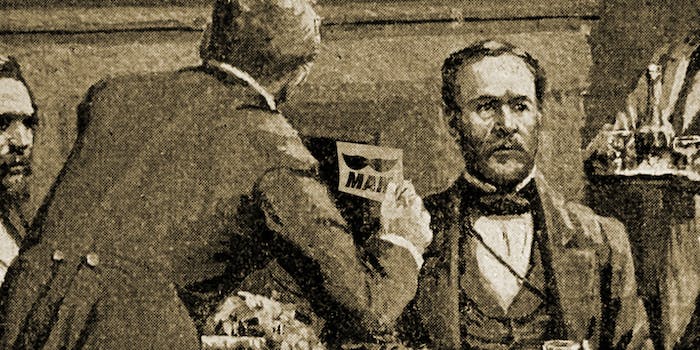 Prove you're manly with your man card. Like, an actual card.

I’m not entirely sure where the concept of the “man card” came from. The idea is that this fictional card is a proof of a man’s inherent manliness. It’s been used in the context of men getting ahead in their careers, to sell guns, but mainly to threaten other men with the specter of losing their masculinity.

You may have a man card, but it can be revoked for reasons that, according to Urban Dictionary (aka the experts), include crying, spending time with women, or doing anything that reeks of femininity.

But how do men even know if they still possess their man cards, and how can other men let them know when they’ve lost their right to have one? For that, there’s the Man Card. No, literally, some dudes made cards.

Multiple companies have produced physical “man cards” for sale on Etsy and private online stores. Most appear to be made of steel (tough!) or another metal, and also function as bottle openers, which seems counterintuitive because everyone knows your man card is revoked if you can’t open a beer with your teeth.

It’s hard to tell how many of these creators are in on the joke.

“THE MAN CARD is constructed from 100% stainless steel in the USA and will make you THE MAN in a time of need,” writes one Etsy vendor.

Another lists the manly things you can do to earn a Man Card, like “getting in a fight with a respectable opponent.”

This one is especially aggressive, asking, “ IS YOUR FRIEND LACKING MANLINESS? LET HIM KNOW BY GIVING HIM THESE SUCKERS AND TAKING THEM AWAY WHEN HE PERFORMS UNMANLY ACTS.”

Mansteel’s Man Card not only works as a bottle opener, but “fits perfectly in your wallet to help prevent wear and bend on your credit cards.” We’ve reached out to Mansteel to see how much of a joke the cards are supposed to be, but haven’t heard back.

The Official Man Card works a little differently. Rather than one badass, metal card, you can order a plastic one, plus packs of 20 paper cards to hand out to other men, letting them know their man card has been revoked—so, you know, it’s a card that says you no longer have a card. The cards accuse the recipients of “displaying some type of unmanly act,” which can only be redeemed by completing a manly task such as “building something with a power tool.”

If you want to get a sense of just what a man could do to get his man card revoked, Official Man Card has an entire section of their website dedicated to community-submitted revocations. The latest is for some guy named Mason Lewis, who achieved “bitch level” for “ the horrid shaving of ones [sic] leg by razor.” Sorry, Mason.

Physical man cards are nothing but a manifestation of self-policing masculinity. Because, while there are women who will (unfortunately) criticize men for not living up to some standard of masculinity, most of the implied threat comes from other men. And this all comes back to, say it with me, the patriarchy!

When society enforces a gender binary and puts men at the top of it, there not only isn’t room for anyone who doesn’t fall into that binary, but for anyone who displays traits outside of what their gender is “supposed” to do. And in a patriarchal society, men have more to lose by doing that. Which means no enjoying “chick flicks,” no wearing skirts, no crying or hating sports or being emotionally vulnerable, lest you become ostracized from your entire gender.

It should be obvious by now that there are as many expressions of gender as there are people. And no matter how many cards you hold, no one can take away your identity.

Also, a handle-bar-mustache cutout is probably not the best way to open a beer.