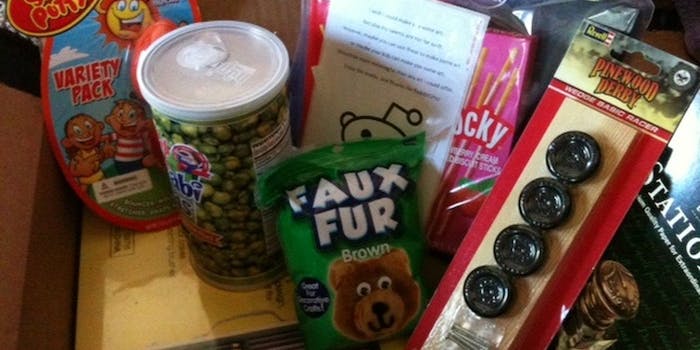 Happy Arbitrary Day! Did you get your gift?

Arbitrary Day, an excuse to give strangers on the Internet gifts, has a detractor. Who doesn't like gifts?

Reddit’s Arbitrary Day, which takes place today, June 25, in the form of meetups around the world, is an expression of the social news site’s sunnily optimistic side. Its purpose is to make a stranger happy by giving them gifts—arbitrarily, on a date six months away from Christmas.

One redditor the Daily Dot spoke to, though, says that he’s been disappointed by past gift exchanges. He has a gift for the creators of Arbitrary Day, in the form of free advice on how to fix it—but they seem reluctant to consider his advice.

This year, Arbitrary Day falls on the same day as the Global Reddit Meetup, a gathering of users of the social news site Reddit. (Since many redditors are largely anonymous on the site, using handles, it’s a priceless chance to meet other redditors in person, and many attend without participating in the Arbitrary Day gift exchange.)

This second annual gift exchange has 7,296 redditors signed up, a jump from last year’s 3,506 participants, according to RedditGifts, an independent site created by redditors to match gift-givers. (There’s also a more traditional Secret Santa gift exchange timed for the December holiday. Participants in that jumped from 4,000 in 2009 to 15,000 in 2010, according to RedditGifts.)

But is there enough goodness in our collective hearts to give random strangers gifts? As is the case with everything on the Internet, one can’t always be sure.

A Chicago redditor who wishes to go by “Peter” said he’s received the short end of the Reddit gift exchange twice. Peter signed up for Arbitrary Day last year, sent his $15 gift—the recommended value—but never got anything in return.

“I was super excited, more so giving than receiving because you’re connecting with complete strangers off the Internet, but the person [assigned to send Peter a gift] didn’t bother participating,” said Peter. “They never actually retrieved my address” from the RedditGifts website.

Not letting one bad apple spoil the barrel, Peter signed up for December’s Secret Santa event: “I was hoping it would go better but once again the same thing happened. I sent my gift, but the person assigned to me didn’t bother even retrieving my address. That was disheartening. That made me think the problem of people gaming the system is prevalent. ”

Sure, one person could be irresponsible, but for it to happen twice in a row? Peter believes it’s a case of people with fake accounts “gaming the system to get $15 gifts off the Internet.” He now finds the whole thing “silly” and said he has no interest in further gift swaps.

Arguably, the system worked for Peter. RedditGifts “rematches” people who don’t receive the expected gift. That happened to Peter, and he received a thoughtful gift from a redditor that actually took the time to read his comments on Reddit to figure out what he liked. This one good exchange was not enough to melt Peter’s heart, though.

He’s firm in not wanting to give strangers gifts over the Internet until Reddit Gifts “addresses the problem of people signing up for a fake or one-time account.“

He believes this could be done if Reddit Gifts “implements something where they match people who had previously given a gift with others who had also given a gift, and the first-timers could be matched with each other.”

When the Daily Dot addressed this issue with RedditGifts community manager Jessica McComas, one of the creators of the site, she said they’d considered actions like Peter’s suggestions before, but don’t think they’re workable.

“We have found so far that people are unpredictable,” said Jessica. “People that have participated properly don’t necessarily continue to do so, and people who have really long-standing Reddit accounts don’t necessarily do better than a brand new person, so we’ve been reluctant to do things that prove you’re a ‘good person.’ I am not sure if we will ever do something like that, as we’re trying to keep it really open.”

Keep in mind that RedditGifts is a two-person husband-and-wife team. It all started in the run-up to Christmas in 2009 when Dan McComas, known on Reddit as kickme444, “asked if anyone was interested in doing a Secret Santa exchange,” said Jessica.

“He didn’t expect a huge response because it’s the Internet and strangers, but within a day or two, there were thousands of responses, so he decided to do it,  and created the website,” she explained.

Jessica McComas hopped on board right away to assist with answering users’ questions, and the two of them work on the site for a couple hours each day without pay.

“Everything is really on the seat of our pants, all the time,” she said.

In a later email exchange, Jessica admitted givers who get shafted do get rematched on the site in order to “get gifts to as many people as possible.” Givers in the “rematch” program don’t receive a gift in return—so they’re acting out of altruism to cover disappointed givers like Peter.

Since 2009, RedditGifts has gone on to create smaller gift holidays, including a book, craft, and snack exchange.

“You have some [gifts] that are over-the-top nice, but there are some that obviously don’t have a lot of thought behind them, but we can’t screen for people’s intentions so that’s hard to deal with. I would say the vast majority of people end up with nice gifts,” saidJessica.

As examples of nice gifts, Jessica points the Daily Dot to the gift gallery section of the site, highlighting a Lego set (because “redditors love Legos”), a geocaching membership and all the items you’d need for it, and the gift Jessica herself received—a big box of “arbitrarian goodies.”

Relying on the kindness of strangers is all well and good, but as Peter’s case showed, not every stranger on the Internet is kind and generous. Perhaps if the holiday gift-giving site continues to attract participants, the site could seek donations to hire someone to implement a program like Peter’s.

Until then, one must take their chances. More than 7,000 people did this year.

Stay tuned for the Daily Dot’s ongoing coverage of Arbitrary Day: We’ll have reporters embedded at meetups in New York and Chicago, we’ll be monitoring reports on Reddit and Twitter, and we welcome your reports in the comments as well.