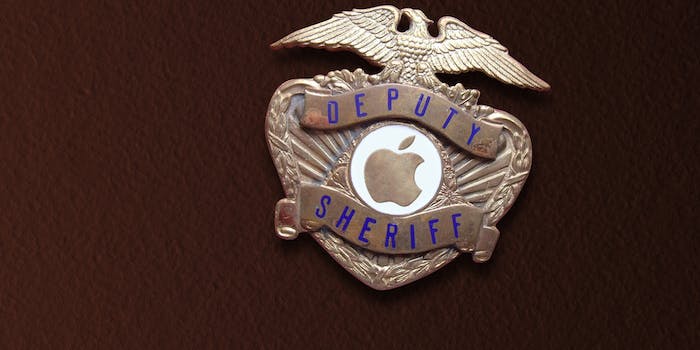 'This case is not what Apple is making it out to be.'

Relatives of the San Bernardino shooting victims and state and national law-enforcement groups urged a federal judge Thursday to uphold an order forcing Apple to help the FBI unlock the iPhone of one of the shooters.

Apple objected to the order, which would force it to write custom software to let the FBI flood the phone with passwords guesses, on the grounds that complying would set a precedent that would lead to more intrusive and dangerous demands. Apple received widespread support on Thursday from tech companies, trade groups, civil-society organizations, law professors, and cryptography experts.

But not everyone is convinced.

“Apple’s refusal to provide assistance has far-reaching public safety ramifications by making it difficult, and in some cases impossible, for law enforcement to fulfill its obligation to investigate crimes, protect the public by bringing criminals to justice, and enforce the law,” attorneys for three national groups—the Federal Law Enforcement Officers Association, the Association of Prosecuting Attorneys, Inc., and the National Sheriffs’ Association—argued in a “friend of the court” brief.

Stephen Larson, an attorney for six victims’ relatives, told the court in his brief that, contrary to what Apple and its supporters argued, the government’s request was “modest in scope” and would not open the door to broader demands.

“This case is not what Apple is making it out to be,” Larson wrote. “What is implicated here is the United States’ ability to obtain and execute a valid warrant to search one phone used by a terrorist who committed mass atrocities.”

The company also claims that Congress, by passing laws mandating technical assistance but specifically excluding some activities, did not intend to permit courts to issue this kind of order. And it argues that the scope of the law underlying the government’s request, the All Writs Act, is so broad that compliance with the order would open the door to unforeseen demands in countless other circumstances.

Larson, the victims’ relatives’ lawyer, dismissed the First Amendment claim by arguing that “the true nature of the ‘speech’ compelled here is that of commercial, functional code” which “does not merit full First Amendment protection.” And he cast aside concerns about the precedential value of the order—which FBI Director James Comey has acknowledged—by calling the order “appropriately modest.”

The dispute over whether Apple should help the government unlock the San Bernardino iPhone is part of a larger, decades-old debate about the responsibilities of tech companies to facilitate investigations that target encrypted technology.

As companies have built stronger and stronger encryption—with Apple implementing a form of security in 2014 that even its own engineers cannot break—senior intelligence officials have warned that they are losing visibility into terrorists’ communications, and law-enforcement professionals have complained of being stymied in their attempts to unlock suspects’ devices.

Some of these officials have pressured Congress to pass a law requiring tech companies to build holes in their encryption so that they can provide the government with customer data if it brings them a warrant. Silicon Valley, leading technologists, and privacy groups have vehemently objected to that idea, calling these so-called “backdoors” dangerous and counterproductive.

Lawmakers are separately considering two ways of addressing this problem: a commission on digital security and a backdoor-mandate law.

Photo via Dave Conner/Flickr (CC BY 2.0) | Remix by Jason Reed