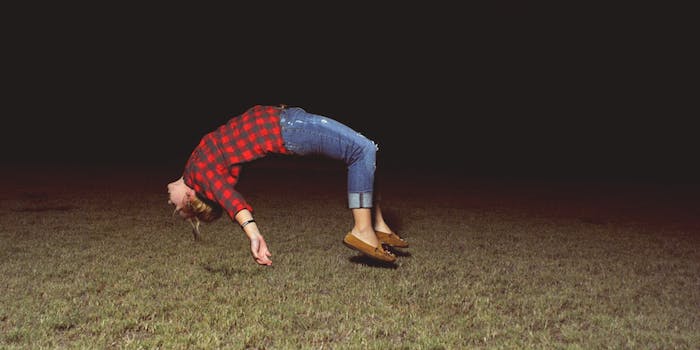 Bizarre exorcism at a Texas Starbucks captured on video

You’d expect a video that starts out with this chipper greeting, apropos of any context whatsoever, to deliver. And the apparent exorcism that took place outside a Starbucks in Austin, Texas, two nights ago doesn’t disappoint.

The video, uploaded to Vid.me and shared on Reddit’s r/Austin forum by redditor Umgar, shows a group of three men just outside the cafe. They appear to be attempting to keep Austin weird by performing a Christian exorcism on a fourth man as he as slobbers and spits into a venti-sized Starbucks cup.

The main performer of the exorcism attempts to banish the “legions of poison,” and informs the demon it “has no legal right” to “trespass on the cross.” We’re not sure if Satan is bound by Texas property laws, but it makes for good popcorn drama anyway.

Umgar stated he returned after his first encounter with the group to film the event. “I stuck around for a while and I can tell you that these guys really believed they were exorcising a demon,” he wrote. “Not a student film project, prank, or social experiment. Just the bible belt.” On the r/videos forum he included an exchange he had with one of the exorcism participants. On asking the exorcist why it had to be Starbucks, he was informed, “God’s everywhere so, you know, god chooses the place.”

While we hope this wasn’t a serious medical incident, such as a seizure, going untreated, we’re guessing it wasn’t actually an exorcism. Spitting and slobbering could easily be anyone’s reaction to the existence of frapp roast.

Update: The video has been removed from vid.me.