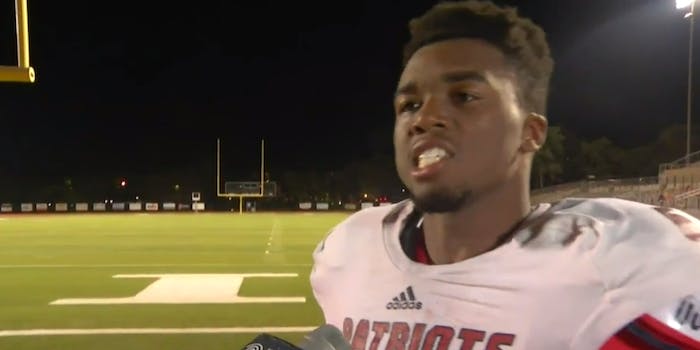 “That’s all it takes to be successful—is an attitude.”

The game’s biggest star, however, was Covey’s teammate Apollos Hester. The senior wide receiver, who caught one of those two touchdown throws, became the biggest thing in Texas shortly after the final whistle blew, as a postgame interview with local news affiliate TWC News Austin ended ended up going haywire around the Internet.

Tapped to talk about the thrill of Friday’s contest by TWC’s Lauren Mickler, Hester stepped atop a two-minute soapbox, preaching with unrivaled enthusiasm about the heart of his team and the virtues of determination.

He goes on to throw water all over himself and tell the audience, “You can do anything you put your mind to.”

A stunned Mickler left the field and quickly posted the broadcast onto YouTube, where it’s been seen more than 771,000 times.

Not one to miss out on an opportunity, Hester’s gone and created a Twitter account to support the rush of attention that’s come his way. On Sunday night he tweeted,

I was not expecting this kind of love! Thank for all the support.