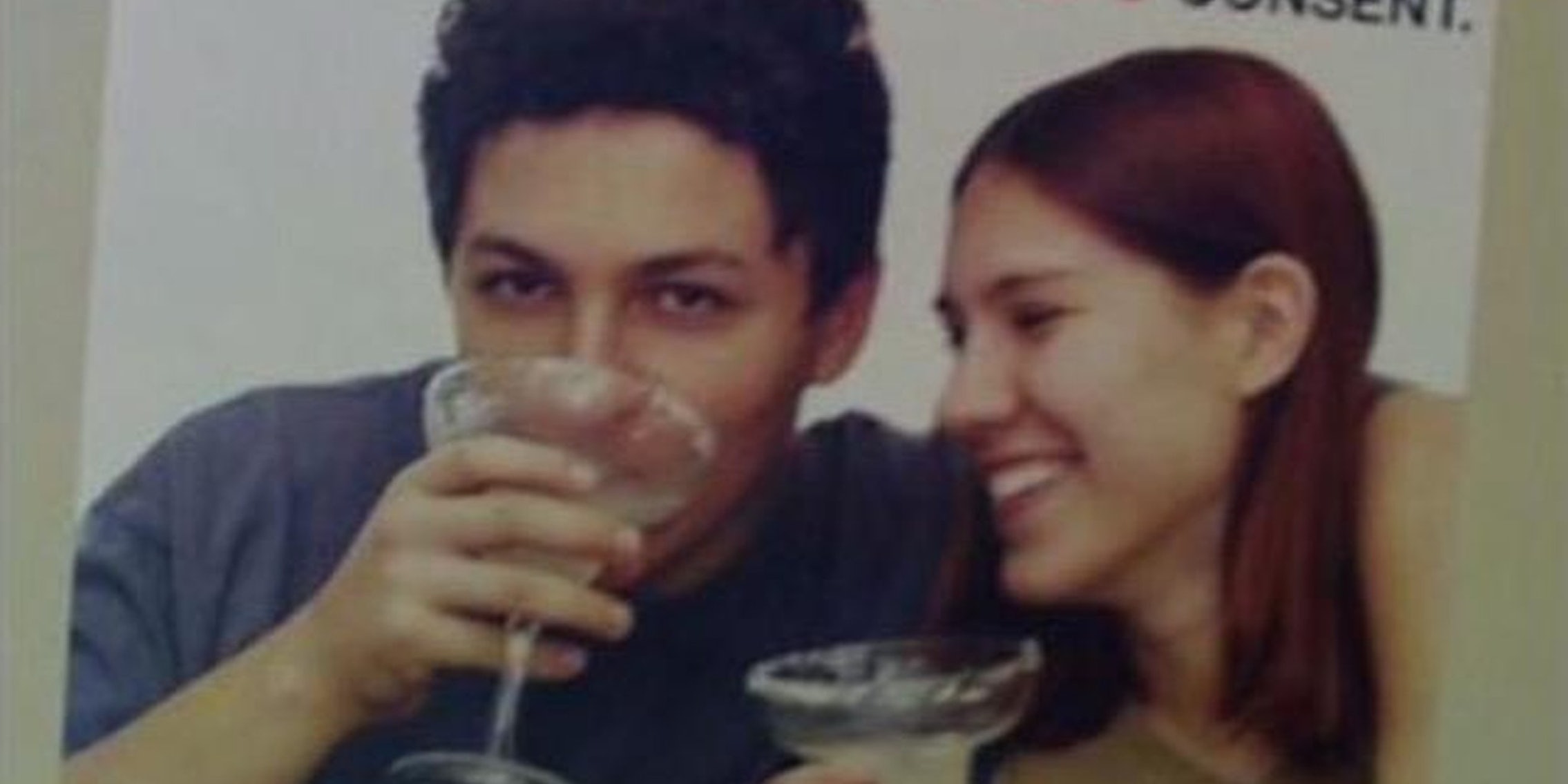 An official from Coastal Carolina University clears the air. 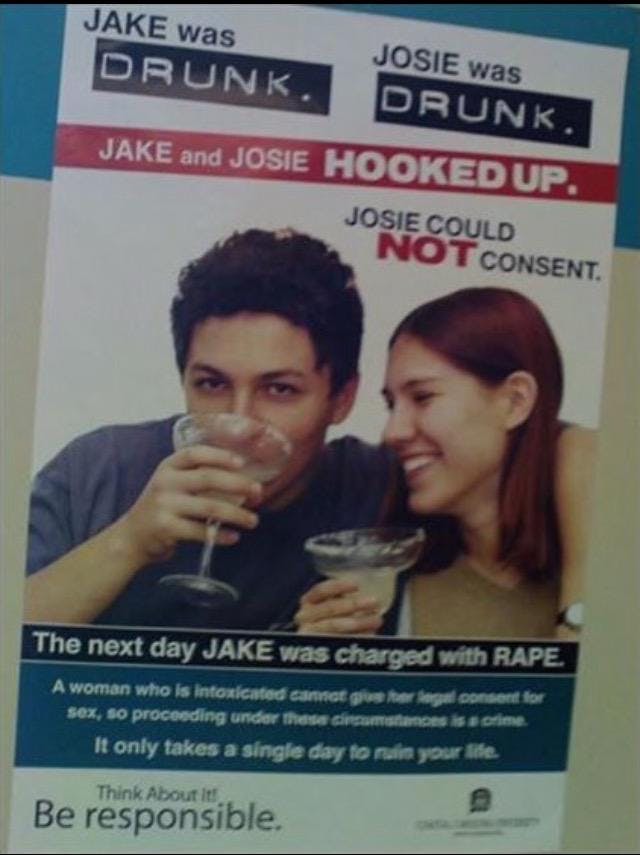 Photo via Louder with Crowder blog

Despite its intentions, Reddit users are not happy about it.

In the poster, the man (Jake) has an arm draped around the woman’s (Josie’s) shoulders. Josie is laughing and smiling at Jake, while he looks directly at the camera. Both are holding glasses of what we can assume to be alcohol. The following text is also included:

Jake was DRUNK. Josie was DRUNK.
Jake and Josie hooked up.
Josie could not consent.
The next day JAKE was charged with RAPE.
A woman who is intoxicated cannot give her legal consent for sex, so proceeding under these circumstances is a crime.
It only takes a single day to ruin your life.
Think About it! Be responsible.

When the poster began making its rounds on the Internet, redditors were outraged, arguing that the poster insinuates Jake cannot be raped because he is a male.

According to these posts, it also undermines the equality feminists have been fighting for.

The sentiment on Twitter was similar, with people wondering why Josie couldn’t be accused of rape just as easily as Jake.

Josie and Jake both made an adult decision while drunk, but Jake is the only one held responsible for it. pic.twitter.com/TdEwMQCcfr

Ok but by this logic Jake was raped too then pic.twitter.com/exIPKdX6XF

Good thing the law determines the crime of rape and not some #SJW, PC college poster. https://t.co/GsuJzGVsJc pic.twitter.com/CZwtbois4W

If it was “Jake coerced Josie to drink and then they ‘hooked up'” or vice versa, sure. But that was just…no

@alkalinesurge And yeah looking at this again,they both hooked up. Josie couldnt consent, but neither could Jake, and that leap of logic >.<

Though the poster was featured on Reddit threads this week, it was unclear who created and distributed the image. One Reddit user noted there appeared to be a logo in the bottom corner of the poster that could lead to the source.

Another user allegedly contacted an official at Coastal Carolina University for confirmation.

Debbie Conner, the vice president for campus life and student engagement at Coastal Carolina University, confirmed to the Daily Dot that the poster originated from the university. Conner said it was published in 2008 by the Campus Assault Resource Education Support Coalition, made up of students, faculty, and staff at the university. “It went out of circulation in 2008,” she said.

According to Conner, this poster wasn’t widespread across CCU’s campus. “I don’t even remember this poster, and I’ve had a few people say that they printed probably 20 of them, and were on a few bulletin boards on campus, but it wasn’t a big campaign.”

Conner also says she isn’t sure what Coastal students’ reactions were to the poster.

“It was seven years ago… So, I have no earthly idea what people said about it, because it was not in my area of responsibility at the time. I don’t even remember that poster even being on the campus,” she said.

Conner believes the original post on Reddit was by a former Coastal student who had a photo of the poster.
“I thought it was really interesting they were even talking about consent in 2007, 2008. It’s a little misguided as a poster, currently,” she said.

As far as why the poster is surfacing now, “I’m sure the conversations around sexual violence continue on social media and many other platforms that it can start quite a good discussion,” she said.

According to Conner, this poster is no longer used at the university.

“The most disconcerting thing for me is that it’s been posted and people don’t understand it’s not something we use or currently endorse on our campus,” she said.

Below is an image of a current anti-rape poster used at Coastal Carolina University, also sponsored by the CARES Coalition. 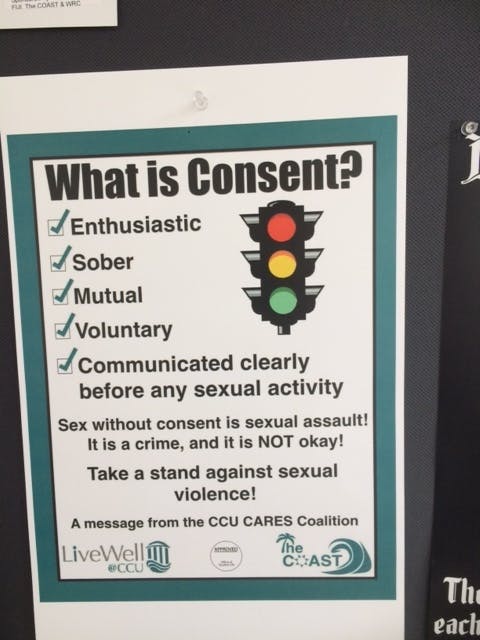 “I think it’s important to know that we do spend a lot of effort in educating our students,” Conner said. “We do have required education regarding sexual violence for incoming students and continued education for students on campus.”

“It’s a topic taken very seriously here,” she added. “And, we continue to move forward with the best practices in the area.”

Photo via Louder with Crowder blog