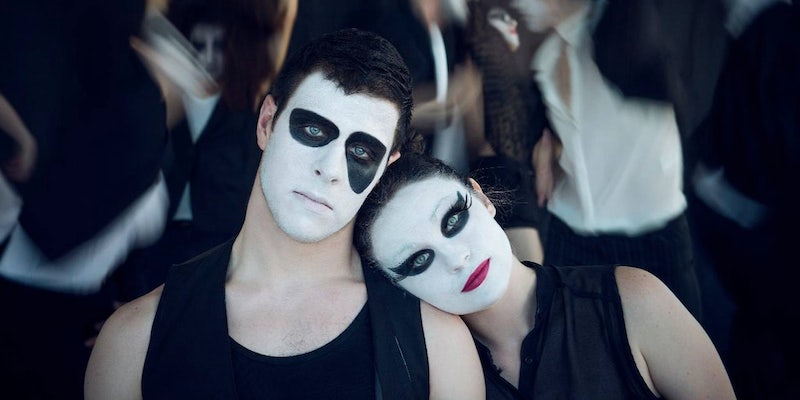 The last place you expected Anonymous: The ballet

We are legion. We are pirouetting.

Sometimes it takes art to really contextualize something as strange as the hacker collective Anonymous, the amorphous group of moral-free trolls turned social justice advocates that emerged from controversial imageboard 4chan and became media darlings after bringing to light the Steubenville case in 2012.

On Nov.15, the Boston-based Juventas New Music Ensemble, a group focused on performing the work of emerging composers under 35 years old, is debuting a ballet called HackPolitik. Among other things, the performance seeks to make artistic sense of not just the collective called Anonymous but what they represent in terms of how we communicate. It was the idea of young American composer Peter Van Zandt Lane, who proposed it to the ensemble’s artistic director, Lidiya Yankovskaya, in May 2012.

Van Zandt Lane, choreographer Kate Ladenheim of New York dance group the People Movers, and Yankovskaya, who is conducting, collaborated on a piece built around Parmy Olson’s We Are Anonymous.

HackPolitik meshes Van Zandt Lane’s new musical composition, itself a union of traditional instrumentation and electronics, with Ladenheim’s choreography in a stage environment that utilizes digital design, all under Yankovskaya conducting. The piece explores how the manufacture of identity has changed in a world where the speed of information has become a variable.

We talked to Lane, Yankovskaya, and Ladenheim about the production.

I was interested in engaging something that would make the tradition of ballet and classical music more relevant, a concern classical composers always deal with. Addressing contemporary issues is one of the ways of doing that.

I’ve been interested in music that intersects with politics, and for seven or eight years I’ve written compositions in which I’ve paired up music and technology, electronic music with traditional music, combining the human elements of classical Western music with signal processing. I saw a parallel with Anonymous, with political dissidents and the technology they use.

Story has been abandoned in modern ballet for the conceptual. But concepts don’t make good music. I was interested in having a story for the ballet, a contemporary version of the folk tales used in Russian ballets. Ultimately, we decided to use Parmy Olson’s book, We Are Anonymous, for our story.

The three movements of the ballet center on the events of three Anonyous campaigns, OpPayback, OpTunisia and LulzSec’s hack of HB Gary, and three Anonymous characters, Topiary, Sabu, and Kayla.

These “characters” are unique. The ballet seeks to capture how they represent themselves online. Kayla is represented online as a woman, despite being a guy or group of guys. They are probably overcompensating for that, so Kayla is very girlish.

The story becomes about ego, wanting to be in the limelight. After Sabu betrayed Topiary, someone posted a tweet. After he was arrested, @YourAnonNews tweeted, “#Anonymous is a hydra, cut off one head and we grow two back.”

We didn’t want to regurgitate what journalism provides, but allow room for emotional expression.

When Kate did a Kickstarter campaign for her residency at the Ballet and Dance Center in Syracuse, she got mixed reviews in the comments. “Who the hell do these people think they are?” vs. “Let’s give them a chance.”

I started this project a moderate, but as I dug into it, spending a year writing music, I became more gung-ho about these activists, the changes they’re capable of effecting. But ballet is not an indictment or meant to glorify.

This performance is not just about Anonymous, it’s about how technology changes political dissidence, about how we approach politics and culture in general.

Before Peter’s proposal, I knew Anonymous existed, but I didn’t know about the particular personalities involved. It was fascinating to learn about the key people who came out and didn’t realize quite the degree of impact they had on our society. Some are people with wonderful ideals. Anonymous is representative of the world, that’s their strength.

We work very hard not to make judgmental statements about Anonymous and its members. The great thing about ballet is that it’s emotionally expressive, and can retain an openness better than if we had done, say, an opera, which is text heavy

I’m a pretty text-based creator, I like to do things based on words. To choreograph the piece we took We Are Anonymous and essays by Bella Coleman, and we first experimented with creating gestures based around the issues they presented. We tried to get at the essence of those ideas.

I knew nothing, literally nothing, about Anonymous before Lidiya approached me to choreograph Peter’s piece. I had heard the name, briefly. But I did a whole lot of research, in particular following individual characters in the story.

I found it a really fascinating culture, this interplay between bunch of 15-year-old kids fucking around in their mom’s basement and their ability to effect meaningful changes.

I feel awe and reverence at their temperament—this chaotic mischievous world juxtaposed with the important changes they fought for. It affected the way I choreographed it. I had to ask, how ridiculous can I make this? Ballet insists on a certain level of formality, and I can’t undermine that. The tension between the ridiculous and the dedicated helped to create the dance.

Here’s an example. While we were in rehearsal residency, we created nine versions of the fuck-you gesture. One was where you stomp your foot, stick your tongue out, and shake your head at the audience. It’s silly and immature. One dancer asked me a question that was hilariously specific. Do we want to keep our tongues loose or firm when we shake our heads?

Anonymous as a group lends itself to a performative expression. To be part of it, you craft a second image of yourself. Topiary is a particularly performative character. His tactics gave Anonymous such a name and tension.

HackPolitik will be performed at 8pm on November 15 and 16 at the Boston University Dance Theater on Commonwealth Avenue in Boston. Tickets are available online from Juventas.