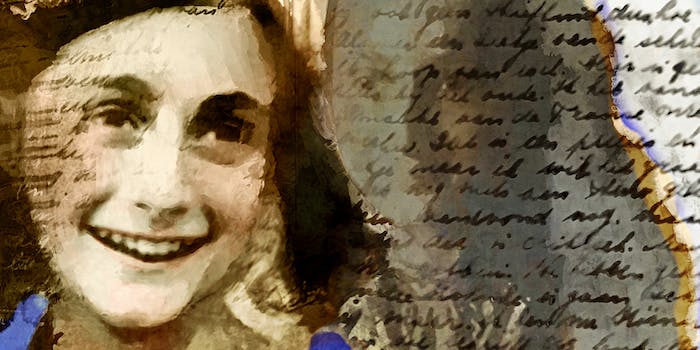 The Harvard Lampoon, the university’s “humor” magazine with a history of racist and sexist commentary, has apologized since coming under fire for publishing a photo of Anne Frank in a bikini last week.

“Gone Before Her Time: Virtual Aging [sic] Technology Shows Us What Anne Frank Would Have Looked Like if She Hadn’t Died,” read the headline above a photo with Frank’s smiling teen face superimposed on the busty body of a woman in a bikini. “Add this to your list of reasons the Holocaust sucked,” the caption beneath it read. The photo was signed with CdLLdR, who is listed as a “staff” member on Harvard Lampoon’s website, though their author page wasn’t loading on Thursday morning.

The “artwork” received immediate backlash, not only for trivializing Frank’s murder as simply a “death” and in turn undermining the brutal narrative of the Holocaust, but for also sexualizing a teenager.

this can not be real.. i refuse to believe it

Unbelievably disrespectful ! and these college kids are the future of America!

If she hadn't died? She didn't die in bed or from disease, she was murdered by an evil regime in the name of racial purity.
And these people are supposed to be our brightest?

I cannot fathom how anyone thought this was funny or appropriate! The Harvard lampoon must be populated by tone deaf imbeciles, not to ignore she was 12 when she was murdered.. shut them down!

It even prompted statements from the Anti-Defamation League and the Anne Frank Center. “Absent good judgment, the @harvardlampoon published an offensive, tasteless, humorlessly photoshopped image of Anne Frank too inappropriate for social media,” the Anne Frank Center tweeted. “The silver lining is they have editorial standards now, albeit a week too late. #thinkfirst.”

Absent good judgment, the @harvardlampoon published an offensive, tasteless, humorlessly photoshopped image of Anne Frank too inappropriate for social media. The silver lining is they have editorial standards now, albeit a week too late. #thinkfirst https://t.co/2Im67mBkFZ

Harvard Lampoon apologized on Tuesday, saying in a statement: “We as individuals and we an organization would like to apologize for our negligence in allowing this piece to be created for an printed in our latest issue. We are sorry for any harm we have caused.”

Adding that the Lampoon “condemns any and all forms of anti-Semitism,” the statement further said it would “approach the content of our magazine with greater care.” “We realize that our publishing process lacks sufficient editorial oversight, so we are going to restructure our advisors, and our peers, we are going to come up with a series of further steps to improve our publication and organization as a whole.”

BREAKING: Harvard Lampoon issues apology for posting Holocaust jokes in the latest edition of the student-run publication: "We realize the extent of offense we have inflicted and understand that we must take responsibility for our actions." #WBZ pic.twitter.com/EO8yI25lOR

But critics say the apology came too late, given that the backlash quickly spiraled into an exhaustive list of past issues people have had with the Lampoon, accusing the publication of perpetuating sexist, racist, and bullying ideology and behavior.

A Change.org petition went viral among students demanding accountability from the the publication and listing their various offenses over the years, including the trivialization of 9/11 and school shootings. The petition linked to an April 2018 Facebook post by Solange Azor, who wrote: “As a WOC and an aspiring comedian with no familial connections, I was tempted to join the lampoon, despite knowledge of its toxicity. I ultimately decided against it, but at times have felt an uncomfortable nagging feeling that the sacrifice/discomfort would have been worth a potential career.”

Cat Zhang, who has written for Harvard Magazine, also posted a note in February detailing the Lampoon’s toxic behavior and “a climate of fear, intimidation, and mystery surrounding the Lampoon that negatively impacts not only the diversity of the institution but how people at Harvard, specifically underclassmen, perceive comedy more generally.”

She shared an incident that was reported by “multiple people” wherein someone from the institution called Black passerby students the N-word. She also wrote about a culture of hazing and mentioned accidentally seeing something about a “rape den” on a Lampoon member’s phone.

It seems the Lampoon has a lot more work to do besides “restructuring” to ground itself in ethics.