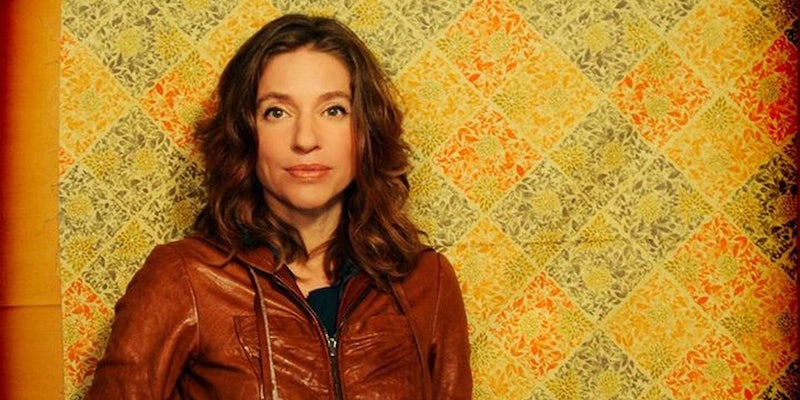 Why feminist icon Ani DiFranco is being accused of ‘blatant’ racism

The musician's choice of venue for an exclusive, $1,000 retreat has left many of her fans furious.

To many, Ani DiFranco is a feminist icon, an artist who has spent the past two decades earning worldwide fame for her sharply political songwriting. Now, it seems that she may have alienated many of those fans with just one Facebook announcement.

On Saturday, fans began to spread word of an event organised by DiFranco, a four-day “Righteous Retreat” where people could jam and hang out with DiFranco in a workshop environment, priced at over $1,000 per ticket. The location? The Nottoway Plantation and Resort, which, in case you didn’t realise this from its name, is a former Louisiana plantation that was the unwilling home to hundreds of slaves.

The event’s Facebook page was quickly overrun with comments from people who were horrified by the idea of holding such an event in a location that represents such a brutal and racist time in America’s history. Was this a betrayal of DiFranco’s ideals as an intersectional feminist?

“I feel sorry for not only Ani, but all the women who look up to her and think of her as a leader or pioneer in feminism,” wrote Ayana Ivery on the retreat’s Facebook wall. “I feel sick,” added commenter Sandra Karlsson. “And [ashamed] of white women claiming to stand up for equal rights but [still] hold on to their white supremacy and ignorance. If this was on Europe it would be similar to holding the event on the sites of the Holocaust. What an immense disrespect!”

The Nottoway Plantation website does little to hide its slaving past, even as it glosses over the human toll of its history, a fact that Di Franco’s critics have been eager to share. The site emphasizes the supposed kindness of the plantation’s owner, John Randolph:

“Ever the astute businessman, Randolph knew that in order to maintain a willing workforce, it was necessary to provide not only for his slaves’ basic needs for housing, food and medicine, but to also offer additional compensation and rewards when their work was especially productive.”

In other words, the plantation’s current owners are attempting to romanticize its founder, sanitizing his role with the claim that he was a relatively humane slave owner. It goes on: “It is difficult to accurately assess the treatment of Randolph’s slaves; however, various records indicate that they were probably well treated for the time.”

So @anidifranco‘s retreat plantation says enslaved people were “a willing workforce” https://t.co/VP4siMR4HG. I am losing my ability to can.

To make matters worse, the Nottoway Plantation is owned by the Paul Ramsay Group. Ramsay is an Australian healthcare billionaire who has previously donated $615,000 (partially undisclosed) to Australia’s right-wing Liberal party during its most recent election campaign, making him the top political donor in the country.

Under current Prime Minister Tony Abbott, the Liberal party has made some very conservative political choices, and on a personal level Abbott is known for dropping sexist and homophobic remarks. It seems vanishingly unlikely that DiFranco had any idea where the money was going when she selected the Nottoway Plantation for her event, but the fact that it is owned by a conservative billionaire does not improve the current image of the Righteous Retreat.

Since the Retreat’s Facebook page went viral on Saturday, more than 1500 people have signed a Change.org petition requesting for the event to be cancelled. The petition reads:

“Ani DiFranco, a well known white “feminist” and queer singer songwriter, is holding a workshop event on a plantation in a town founded by racists. This is insulting to black feminists and black queer individuals and is a very blatant display of racism on her part… Holding an event on the site of the genocide of black people is no way to show inclusion and intersectionality, both of which are important tenets of feminism.”

A handful of commenters on social media are attempting to defend DiFranco, arguing that the location’s history as a slave plantation is all in the past, and that DiFranco’s record as an inclusive feminist speaks for itself. It even seems that one white commenter may have created a fake “black” Facebook account just to post supportive comments on DiFranco’s behalf.

This only served to invite more criticism from fans who see the Righteous Retreat as an example of a growing divide in the feminist movement, wherein white feminist icons appear to ignore oppressed minorities within the community, in favor of strengthening the privilege of white women. The fact that DiFranco has not apologised or made a public statement regarding the Righteous Retreat’s potentially racist overtones is a true blow to many of her fans, who viewed her as a rare example of inclusivity and intersectionality among high-profile white feminists.

Update: On Sunday night, DiFranco cancelled the Rigtheous Retreat. In a blog post, DiFranco wrote: “i did not imagine or understand that the setting of a plantation would trigger such collective outrage or result in so much high velocity bitterness. i imagined instead that the setting would become a participant in the event. this was doubtless to be a gathering of progressive and engaged people, so i imagined a dialogue would emerge organically over the four days about the issue of where we were. i have heard the feedback that it is not my place to go to former plantations and initiate such a dialogue.”