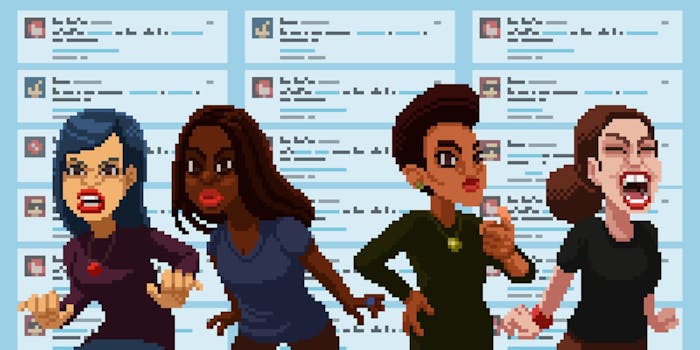 How women are owning the right to their anger on Twitter

Women are finding solidarity and validation on social media, and we are here for it.

You hear about the female celebrity “clapback” all the time: Comedian Amy Schumer took to social media to express irritation at a fan who claimed to have “paid for her” to Instagram. Supermodel Chrissy Teigen tweeted her irritation to 1.5 million followers when she was criticized for eating out a week after having a baby. And model and new mom Brooklyn Decker aired her frustration when she missed her flight after being given permission to deplane to pump breast milk.

WHO LETS PASSENGERS OFF, THEN CLOSES THE GATE SHORTLY AFTER?!? *GULPS WINE* MISSES BABY *SOBS*

As women and as moms we try to do it all but it sure ain't easy.

But anger—palpable female anger—isn’t just for the famous. Regular women are pissed about the way they are treated, from harassment to sexual abuse to everyday sexism. And while this rage may be minimized, called rants and hissy fits and clapbacks, it is so much more than anger.

In the day-to-day, women are often stymied from expressing the full range of their fear, anger, and resentment at the host of inequities that they face—instead these emotions leak out in therapists’ offices and in coffee dates or drinks with intimate friends. But on social media, Twitter especially, whispers turn into shouts and side conversations turn into trends, backed by many who agree. In these anterooms of social media women are finding the support and validation they often can’t get in real life.

Writer Alana Massey, whose book, All the Lives I Want, is forthcoming this year, found support on Twitter last year when she was threatened by an ex-boyfriend.

At the time she tweeted about the incident, Massey’s follower count was significantly smaller than her current 12,100 followers. But she still received numerous empathetic responses.

@AlanaMassey Jesus, I hope you don't have to see him around, he sounds unhinged.

On May 2, an anonymous student, took to Twitter to share the story of her rape. Her story quickly gained viral attention and series of hashtags #RapedbyMorehouse #RapedatSpelmen catalyzed the colleges to launch an investigation. Her social media complaints gave her a voice and control and inspired action.

Its sad that I have to create a page to express myself rather than tweeting from my real account because AUC students blame & bash victims.

In both instances, these women were able to find care and substantiation through women who relate—numerous strangers they wouldn’t normally have access to when horrific instances go down in their daily lives.

“Social media allows us to form supportive communities, letting others know they aren’t alone or ‘overreacting,'” Laura Bates, author of the book Everyday Sexism and founder of The Everyday Sexism Project, told the Daily Dot. “And we hear from many women who say they have reported an assault or experience of discrimination for the first time (offline) because of precisely this sense of solidarity and support. Social media is also important because it enables us to amplify women’s voices and get the word out about inequality to those who might not be aware of the problem.”

Just a fave or a retweet can be all the validation someone aching to be heard needs. Or as Massey explained in an email, “Social media accounts that are enabled to share and retweet their content allow anger to be validated through multiplication. Retweets are not always endorsements, of course, but the willingness of others to share women’s anger can signal to us, ‘You have a right to this anger. You are not crazy. You are not alone.’ I find that the wider an angry social media post spreads, the more my anger diffuses at knowing that anger was a rational, shared response to it. “

Nicole Chung, a writer and managing editor of the website The Toast, was recently the subject of racist attacks. Her friends and followers banded together to report the attacks and even sent her some brownies with the note, “Fighting racists is hard. Here’s some fortification.”

I have no idea if they noticed, read, or cared about the reports/tweets you guys sent on my behalf, but regardless — thank you.

I have also been on the receiving end of social media attacks in response to articles I’ve written, or opinions I’ve expressed. And almost every time, a friend or a stranger, someone I’ve met through Twitter, has jumped in to provide support or a funny quip.

@lyzl except Bernie Sanders has a better track record for supporting women and LGBT. Nice Ignorance.

@BustingBots which has precisely zero to do with whether or not it's OK to have a screaming fit at a stranger during a caucus.

Which is why the word “anger,” an emotion with a negative connotation, doesn’t really encompass the movement that social media is enabling with it comes to women being heard. What often begins as anger is often diffused into humor, sarcasm, support, validation, and a range of emotions and responses that shed light on the larger issues facing not only discussions about women’s experiences, but the way women discuss those experiences.

“I think it is important first to say that feminist projects on social media are often misconstrued, sometimes deliberately, by the mainstream media as rage or anger when they are something else entirely,” said Bates. “For that reason, among others, I’m reluctant to categorize the function of Everyday Sexism and other feminist online projects as purely an outlet for anger, though they do sometimes perform that function and rightly so… Alongside anger, they also provide an outlet for solidarity, humor, resilience, pragmatic problem solving, education, and more.”

Another benefit of social media is that it allows for time to formulate thoughts and some measure of control over who we respond to. Additionally, the liminal quality of social media—neither totally IRL, yet not devoid of realness either—acts a fissure, through which escape the voices and experiences that often don’t have a place in the more regulated sections of our lives.

“Anger is often the most rational response to injustice, so the more women who give voice to their own outrage, the more other women will feel that their anger is valid, justified, and that whatever harm caused it requires remedy,” said Massey.

A woman in a coffee shop may not turn to the person behind her in line and talk about her sexual assault or her battle with mental illness. But a woman can turn on social media and start that conversation without prompting and find support. Twitter, Facebook, Tumblr, and Snapchat provide women with a personal platform, unedited, unfiltered, that gives them a place to be heard. Hashtags like #shoutyourabortion, #yesallwomen, and #womencard allow women to participate in discussions that are not necessarily happening at home or work or during all the errands and events in between.

“I think social media is also an important tool for these stories and for women to express their responses, including anger, because in many cases, in real life, systemic inequality prevents them from being able to speak up,” Bates said. “For example, in the workplace, if they are afraid of losing their job, or in a case of street harassment, if they are afraid verbal abuse might escalate into something worse if they respond.”

Not that Twitter is immune to men jumping into threads and threatening violence on women. But while some women are choosing to flee social media over attacks, others aren’t letting that silence them. The online abuse is just provoking more anger.

In 2014, Emily Gould wrote in an essay for Buzzfeed:

I’d go so far as to say that the people who tell women to “just ignore” gendered criticism, bullying, and harassment—which I’m fine with lumping together, because they’re all components of a system that works together to repress women’s work—are asking women to collaborate in their own silencing. I’m not going to ignore it; I’m not even going to try. If “feeding the trolls” provokes or encourages them in the short term, I don’t really give a fuck. In the long term, with sustained resistance, it’s the only way to create the impression that something has to change.

Massey who has many trolls of her own—and has no problem calling them out—concurs: “The more women express anger openly, the less credibility both male-dominated society and individuals have to dismiss angry women as unhinged outliers,” she said. “Anger is often the most rational response to injustice and other harms, so the more women who give voice to their own outrage, the more other women will feel that their anger is valid, justified, and that whatever harm caused it requires remedy. And a critical mass of angry women is patriarchy’s nightmare.”