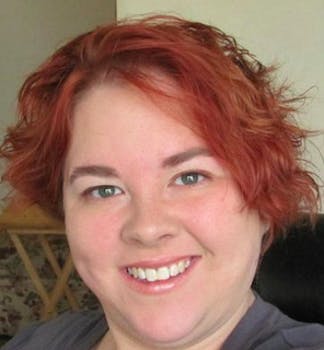 Angelica Marie Schaaf Rayl's passion for the arts-and-crafts community ran deep. So, too, do her online friends' memories.

“Come work in our world honey,” she once wrote to a Etsy customer service representative who had attracted her ire, “because we would eat you alive and spit you out like the trash you are.”

A tart tongue may be how Rayl is most readily remembered — but there was so much more to her story, which came to an abrupt end last month. Rayl, 31, passed away suddenly on May 5 due to complications from diabetes. She left behind a husband, four children, and a devoted online following that struggled to accept her loss.

Rayl was the only public face of Etsy Bitch, a group blog that quickly became a focal point for disgruntled Etsy sellers after it launched in 2008. Rayl’s anger came from a passionate belief that sellers on Etsy — many of whom struggled to make a living from their at-home arts and crafts business — were being misled and taken advantage of by the site and Rob Kalin, its founder.

Kalin famously claimed in a 2008 interview with Martha Stewart that “anyone here—if you’re in school or out of school, or if you’re any age—can start a business from home.”

That kind of hyperbole was a ripe target for Rayl and her cohort. The loss of her critical voice was felt deeply.

“Incredibly, incredibly sad and sick to my stomach over this,” wrote Lori Anderson in a response to a post on Etsy Bitch announcing Rayl’s death. “I remember sharing with her excitement over her last little one’s birth. I lay in bed last night just — well. This is so sad.”

“I will never forget her courage, honesty and that razor sharp wit,” added Margaret Crow, who runs the shop glittercritter on Etsy. “Her legacy here is important to me and many, many people who would have felt voiceless otherwise.”

Rayl was born in Gallup, New Mexico in 1979 and was a kind-of serial handcrafting entrepreneur. She opened Desert City Bathworks and DukeCitySoapCo in 2005, using Etsy to sell her  products, and frequently organized craft fairs wherever she lived. She had recently moved with her family to California to take a job at the online gaming community, Kabam.

Etsy Bitch grew out of Etsy’s forums, where admins often shut down threads critical of the company. As a response, Rayl and others began organizing an email group, which in turn spawned the blog in May 2008.

“Me and Angelica sorta went: ‘we are saying some good, funny shit,’” said The Cranky One, who, like other surviving members of the site, refuses to reveal her identity for fear of retribution. “We can’t be the only people who would be amused by this.”

In a kind of proof of concept, shortly after Etsy Bitch’s launch a thread on the Etsy forums discussing the site was shut down after just an hour of discussion.

“This isn’t the type of subject we encourage promoting in our forums,” explained staff member Mary Andrews.

By then, the thread had already gathered 11 pages of comments — most of them sympathetic to the site.

The bloggers at Etsy Bitch were especially critical of Etsy’s customer service and alleged favoritism towards certain stores. But despite posts laden with sarcasm, Rayl always emphasized her deep ties to the site and its community.

Then, in 2009, Jessica Bruder, a reporter with Fortune contacted the blog. Fortune does not allow anonymous sources as a matter of policy, so Rayl decided to step up and become the public face of the Etsy Bitch. Bruder’s story, “The Etsy Wars,” was published in Fortune Small Business in July 2009.

“She was willing to do what the rest of us weren’t,” Cranky said. “She was braver.”

“Angelica just rolled over and shook it off,” she said. “I would have looked up my state laws for cyber stalking. Angelica just went ‘oh well.’ ”

To a certain extent, all the complaining eventually paid off. Kalin stepped down as CEO in 2008. When he returned in late 2009, he zeroed in on addressing common seller complaints. He doubled the staff, adding more engineers and customer service representatives, and pushed for dozens of new features to improve the website.

But Etsy Bitch, at any rate, wasn’t satisfied. In a May 20 post celebrating the site’s four year anniversary and mourning Rayl’s death, Cranky complained that, fundamentally, very little had changed in four years: “They are still playing the same games we first posted about in our first month – so little progress made for sellers.”

In an email to the Daily Dot, Adam Brown, Etsy’s press manager, said: “I’m very sorry to hear of Angelica’s passing. I did not know her, nor had I ever interacted with her. I wish her family the best in their time of need.” Etsy otherwise declined to comment on Etsy Bitch or Rayl for this story.

Cranky said that, even though Etsy “frustrated the hell out of her,” Rayl still maintained a presence in the community.

“It was the people she cared about,” she said. “Not the staff. Not the selling.”

Rayl’s husband, Kevin Schaaf, lost his job just two days before her death. To help the family deal with the financial toll, Etsy Bitch and other sites have organized a fund-raising drive.