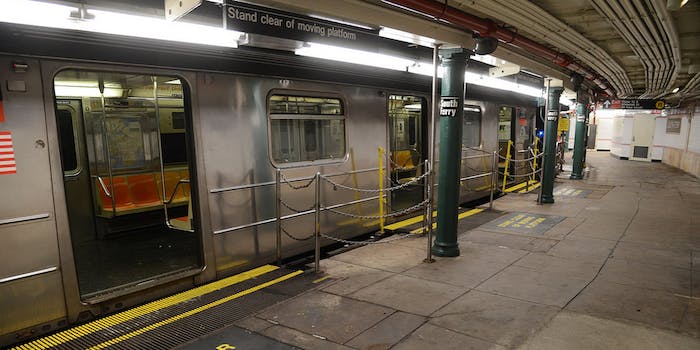 "You just need to know the law."

New York City cops arrested a subway busker for loitering on Friday night, ignoring the fact that the man had recited the law that allowed him to perform in subways.

Andrew Kalleen argued with a cop near the southbound G platform about whether or not he was allowed to play there. As passersby looked on, some throwing comments the cop’s way, he insisted that Kalleen needed a permit to perform in subways.

Kalleen then recited by memory Section 1050.6c of the Metropolitan Transit Authority Rules of Conduct, which allowed him to perform in subways without a permit, while the police officer read the rule on a cellphone.

Except as expressly permitted in this subdivision, no person shall engage in any nontransit uses upon any facility or conveyance. Nontransit uses are noncommercial activities that are not directly related to the use of a facility or conveyance for transportation. The following nontransit uses are permitted by the Authority, provided they do not impede transit activities and they are conducted in accordance with these rules: public speaking; campaigning; leafletting or distribution of written noncommercial materials; activities intended to encourage and facilitate voter registration; artistic performances, including the acceptance of donations;

After reading the rule, the cop called for non-emergency backup and still insisted that Kalleen needed to leave. The officer told Kalleen that he was being ejected, not arrested. Others asked the officer why he was ejecting Kalleen, but the cop didn’t respond.

Kalleen tried performing Pink Floyd’s “Wish You Were Here” until the cop wrestled the guitar out of his hand and led him away in handcuffs.

An NYPD spokesperson told Gothamist that Kalleen was performing and accepting donations “without permit of permission” from the MTA. He was arrested and charged for loitering because he was a “transit recidivist,” someone who had an open ticket or warrant possibly related to turnstile-jumping or a similar offense.