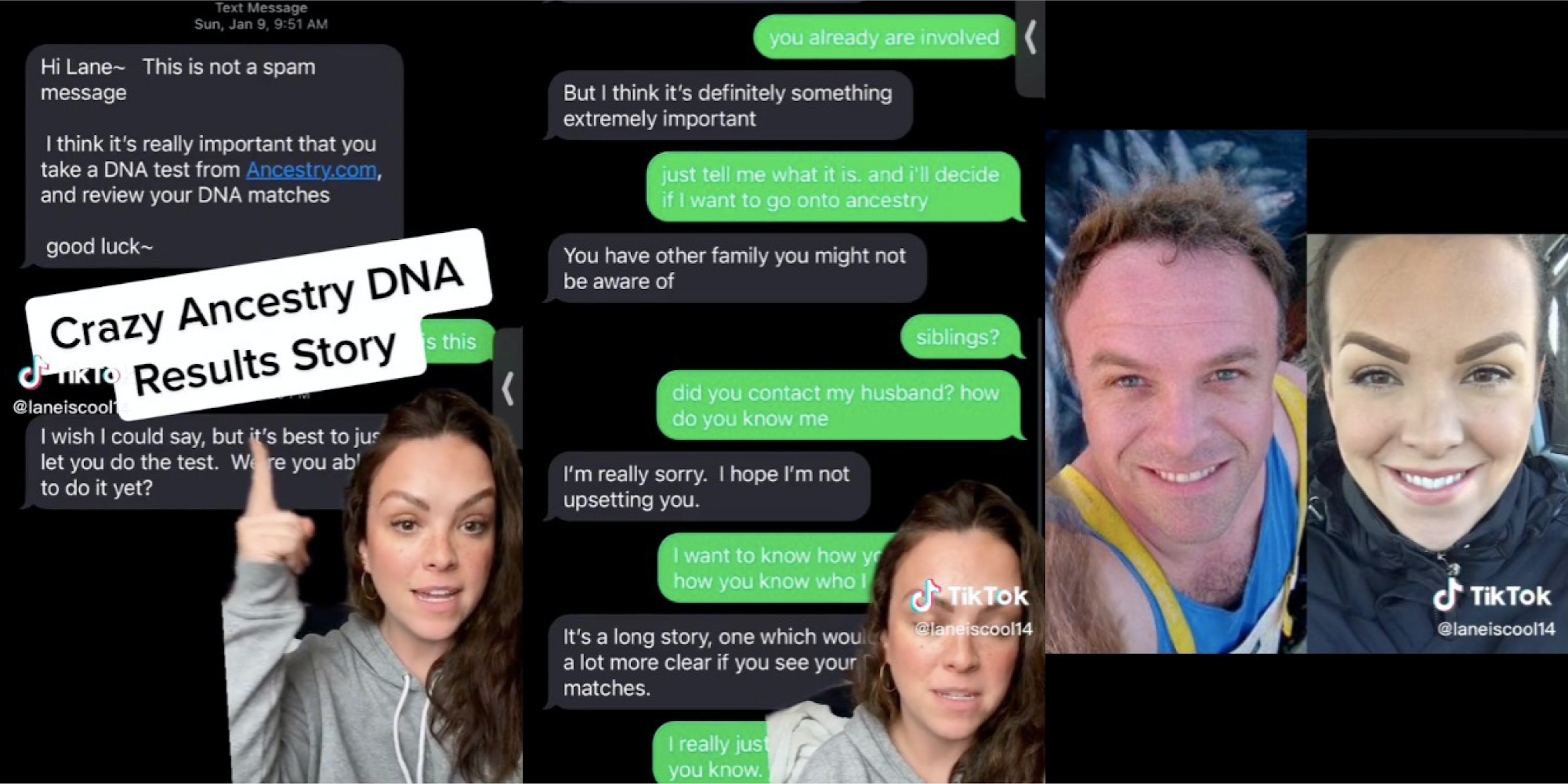 'He watched me date my boyfriend, get married, have babies, everything, all from the outside, not able to know me.'

A woman says she received a message from an unknown number urging her to conduct an Ancestry.com test in order to find the truth about her parentage in a now-viral TikTok storytime.

In the video posted by TikToker Lane (@laneiscool14) on Dec. 1, she points to a screenshot of a text message she received from an unknown number, saying, “This fucking text message right here changed my life forever.”

“About a year ago now, on Jan. 9, I get a text message telling me to get a DNA test from Ancestry. And I think it’s fake, I FaceTime my friend, and I’m like, ‘Listen to this.’ And she’s like, ‘I swear my gut is telling me this is real. You need to respond.’ So I respond, and then they write me back,” Lane continues.

Lane shows another part of the text conversation, saying, “I was shook that they responded, and I let them know I had already done 23andMe the year before because it was on sale. I was hoping I was gonna find that I was like secretly exotic or related to royalty, but I’m just English and Irish like I thought I was.”

“They would not provide me with any sort of proof that this was real, and, obviously, I called my mom immediately, saying, ‘What the fuck,'” she continues.

As it turns out, the message she received wasn’t someone just messing with her, and Lane’s mom revealed that she had an “affair” while she was in college.

“My mom always told me this story that she was an alcoholic and my dad was a cheater. So when I called her, she says, ‘I know exactly what you’re talking about, I had an affair.’ I almost fell off my fucking chair,” Lane says in the video. “She had an affair with a guy ten years younger than her when she was in college. It was a one-time thing, but he even saw her on campus and said, ‘Is that mine?’ and she denied it.”

Lane says that she ordered “an Ancestry test immediately” and waited six weeks to get her results.

“I find out that, yes, this man is my father. So I message him immediately, and he lives in California. He’s British. What the fuck? He said my mom sent him a Christmas card when I was two years old, saying my name in it and that he’s googled my name ever since,” she says. “He followed me on social media my entire life. He watched me date my boyfriend, get married, have babies, everything, all from the outside, not able to know me.”

She then posts a side-by-side photo of her and her biological father, saying, “I’m telling you this picture freaked me the fuck out.”

The video has reached over 7.9 million views as of Tuesday, with commenters asking Lane for more details.

In a follow-up video, Lane explains that her biological father attempted to keep track of her and stay in contact over the years. She says that he once called her place of work at the time and asked what time they closed in the hopes of hearing her voice.

Lane says he also revealed he wanted to go get his hair cut by her at the salon she worked at but said that his current wife advised against it because she thought she would immediately know he was her father.

She also learned that it actually wasn’t her biological father who sent the text messages, but rather his nephew, who found himself in a similar situation.

Lane said that the realization also put a significant strain on her relationship with her mother.

“You can imagine a secret of this magnitude requires a lot of lying and betrayal and manipulation to keep it up for this long. Cutting my mom off was one of the hardest things I’ve ever done. Never would I have ever expected it. We were like this [crossed fingers] growing up. I used to tell people she was my soulmate,” Lane says.

She said that she met up with her biological father and had imagined scenarios of how he would greet her when they finally saw each other.

However, Lane says she left their meeting feeling like he thought she was “stupid” and didn’t like her, recalling that they didn’t make a lot of eye contact during their conversation. She did concede that it could just be a difference in personalities, which was echoed by one commenter who said that he could be more reserved due to the fact that he’s “British” and “it takes a while to open” for some folks.

“Our interactions left me feeling very confused, very invalidated. I was there for like five days. We met up once or twice a day to hang out and go out to eat or something and every time I felt like I was prying information out of him and I just felt like he didn’t like me,” Lane continues. “I was A-OK until the last day, and then I got very emotional because I guess I was just hoping by the last day it would be different and when it wasn’t, it was just hard.”

“So here I am back in New York, and yeah, I hope that our relationship continues to get better,” she says, throwing up her hands and shrugging her shoulders.

The Daily Dot reached out to Lane via TikTok comment.