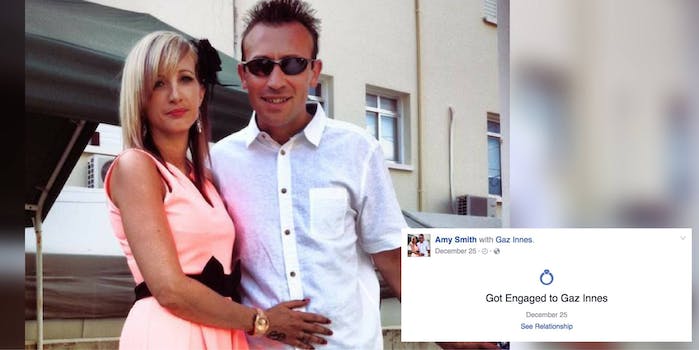 Hundreds of people crowdfund dream wedding for woman with cancer

After being diagnosed with cancer, one woman from Norwich, England, heard wedding bells, not sleigh bells, on Christmas Day.

Amy Smith, the manager of her family’s cafe, The Muddy Cup, and a mother of two young girls, had been diagnosed with cancer of the lungs, shoulder, and spine on Dec. 20. After undergoing a 10-hour operation, Smith had been restricted to the hospital but was allowed to return home for eight hours to celebrate Christmas with her family.

That’s when her partner of 10 years, Gareth Innes, proposed. In the presence of her two daughters, 8-year-old Lexis and 11-year-old Tian, Innes knelt next to Smith and presented her with a ring box. When she opened it, he leaned into Smith and asked, “Will you marry me?”

Smith’s diagnosis followed a yearlong struggle with shoulder pain and dislocations, she told the Eastern Daily Press. Initially, she was told to have physiotherapy to help with the dislocation and was shocked to learn the true diagnosis.

During the surgery, doctors removed part of a tumor that had crushed three of Smith’s vertebrae and inserted two metal rods along her spine to support her. She’s now undergoing radiotherapy and chemotherapy.

With little time to waste, Smith and Innes have set their wedding date for February and it didn’t take long for Smith’s friends to create a GoFundMe page for her wedding and medical expenses.

Smith and Innes told the Eastern Daily Press that the wedding will make their dreams come true, and she hopes she’s able to take a few steps down the aisle on her big day.