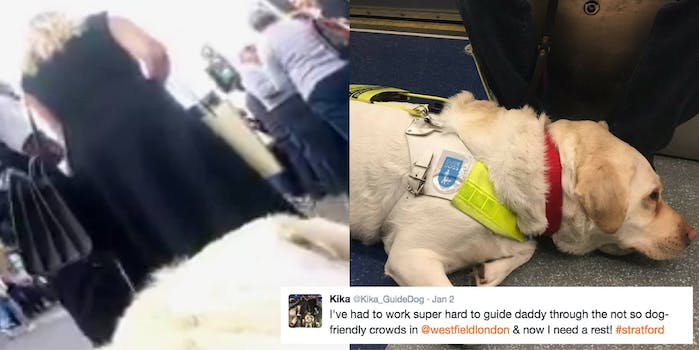 Screengrabs and photo via Kika_GuideDog/Twitter

Integrity is doing the right thing, even if the only person watching is actually a GoPro-enabled guide dog that goes by the name of Kika.

Last year, 37-year-old Amit Patel, a former doctor from London who is blind, fitted his guide dog Kika with a GoPro camera in order to record discrimination and harassment that the pair face daily.

“Kika was getting hit by peoples’ bags and she was getting a lot of abuse,” Patel said. “A woman stopped me one day and had a go at me for holding everyone up and said I should apologize, which was a real shock.”

Patel, a former doctor, lost his sight to Keratoconus, an eye disease that affects the shape of the cornea, in 2012. After six failed cornea transplants, Patel was told doctors could no longer attempt the procedure. In September 2015 Kika became Patel’s guide dog.

Exactly one year ago today I officially arrived at my new home! Daddy & I are celebrating! #guidedogs #lifechanging pic.twitter.com/L9tsDZQXyO

Patel has recalled to multiple outlets a series of incidents involving Kika and other Londoners. Sometimes taxi drivers pretend they cannot see him, or train passengers will run ahead of Kika and knock into her or hog seats.

In situations such as these, the GoPro footage becomes almost necessary to show how other passengers and pedestrians treat him and Kika.

“Most of the time people are fantastic but you do get bad days. You get some days where the moment you step on the train you know it will be a bad one,” Patel told Evening Standard. “Kika knows where to sit once we are on the train but the footage will show sometimes she can’t find me a seat because passengers who don’t need assistance are sat there or there are shopping bags on them.”

When Patel comes home for the day, his wife Seema reviews the video to see if actions, such as ignoring Patel or bumping Kika, were done intentionally. The couple then shares videos on Kika’s Twitter account in an effort to raise awareness about the mindlessness of people toward others who are blind.

Take these videos below of a situation at a train station in London. Patel had waited to receive help from staff standing around and ignoring him and Kika, before finally calling out for help.

“One of the things I noticed with losing my sight is how lonely it is. If I’m traveling by public transport I will be the scared little boy sat in the corner,” Patel told the BBC. “You can’t listen to music because you’re listening out for dangers or to station announcements.”

I've had to work super hard to guide daddy through the not so dog-friendly crowds in @westfieldlondon & now I need a rest! #stratford pic.twitter.com/nd9JBHy6r1

Up at 5.30am, back home at 5.30pm, 15km walked, 10 London stations visited – all in a day's work! Sweet dreams everyone! pic.twitter.com/mzMdNqFBvs

@LPQUK Thanks to the team at Le Pain Q North Audley St in #London for looking after me today – I even got a proper bowl! #guidedogfriendly pic.twitter.com/BPDTAeNoLv

“People distract [Kika], get in the way, try to be funny, or bump her,” Patel said. “Some parents don’t care and have their children screaming at the dog or petting it—so I have to kindly tell them she’s working and ask if they can wait until we get on the train.”