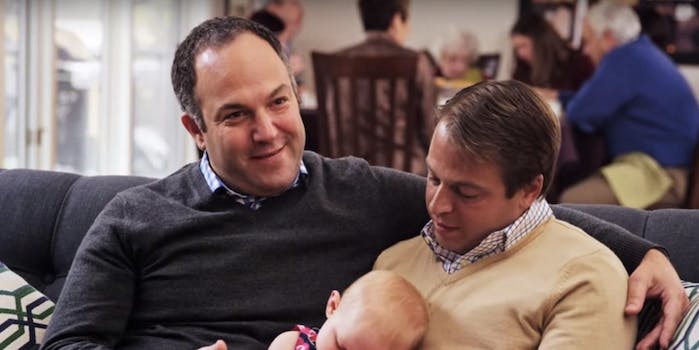 Allstate under fire from religious nonprofit for LGBT-friendly ad

In December, Allstate Insurance posted a new ad to its YouTube page that featured two dads talking about their newborn baby daughter. The video is a tearjerker, with the dads reflecting on the miracle of parenthood while acknowledging the long, hard road traveled to get there.

“Within our lifetime, we’ve gotten married and had a child,” said one of the dads, “And 20 years ago that wouldn’t have happened.”

But even a heartwarming commercial for a massive corporation can still become a battleground for homophobic attacks that rage with new commitment in the months following the Supreme Court’s historic marriage equality decision.

On Tuesday afternoon, the American Family Association (AFA) launched an attack on the Allstate ad, issuing a statement of alarm and a petition that has garnered more than 30,000 signatures in 48 hours.

In a statement riddled with sarcastic quotation marks (at one point referring to the video’s second dad in quotes as the “wife”), the AFA claims that research shows children of LGBT parents are fraught with problems not faced by kids raised by heterosexuals.

Thus, the AFA is “Urging Allstate to stop its promotion of normalizing homosexual parenting when children’s welfare is at stake.”

“The Allstate promotion does not share the reality that this child will grow up without the nurture that only a mother can provide,” reads the AFA statement. “Nor does Allstate recognize the emotional trauma and questions this child will endure growing up in a home with two men.”

As far as studies that allegedly prove children fare poorly when raised by two parents of the same gender, the only study cited by the AFA and FRC is the much-disputed Regnerus study—routinely denounced as partially invented “junk science” funded by conservative right-wing groups like the National Organization for Marriage, Witherspoon Institute, and Bradley Foundation.

Despite the fact that a follow-up published in the same journal suggested that the Regnerus study was largely made-up, the study is frequently used to support anti-LGBT legislation internationally as well as in the United States.

While one study, funded by conservative anti-gay marriage groups, reported that children fared poorly in same-sex households, countless other studies found absolutely no difference in children raised by LGBT parents versus straight parents.

In an amicus brief filed at the Supreme Court in support of the same-sex marriage case Obergefell v. Hodges in 2015, the nation’s most respected health authorities asserted that “Factors that affect the adjustment of children are not dependent on parental gender or sexual orientation.”

The Daily Dot reached out for comment to Allstate Insurance on Thursday afternoon but did not immediately receive a response. So far, it’s not clear whether the company will issue a statement regarding the protest.