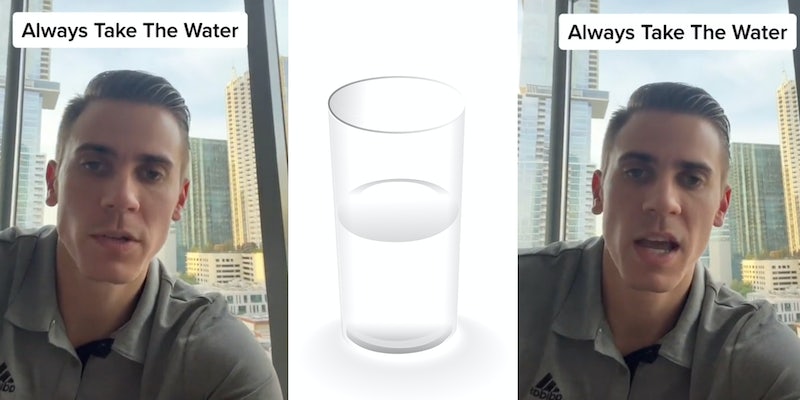 ‘It builds an instant connection’: Should you take the water when someone offers you water in a job interview?

'Nah I’d be relieved they declined. Let’s be real I offered it out of politeness.'

If you’re someone who normally declines a glass of water, you might want to start accepting it. One TikToker says you should always take the water when someone asks if you’d like water, in order to differentiate yourself.

The TikToker, Grant Mitterlehner (@grantmitt), is the CEO of a solar company and has about 142,000 followers. He’s known on the app for posting life advice and job hacks.

In one of his recent videos, he tells his followers “always take the water.” He says it’s a simple psychology trick that will help them be more liked and respected “immediately.”

Usually, when you enter someone’s home or business, they offer you a glass of water, Mitterlehner says. Most people usually decline the water.

“Be the person that says yes,” Mitterlehner says in the video. “Think about who people want to give things to when they visit their homes: people they like, love, and respect. So be the person that says yes because it shows that you respect yourself, it differentiates yourself from others, and it builds an instant connection with that other person.”

Mitterlehner’s advice seemed to resonate with viewers. Several commented saying that they like it when people accept the water they offer them.

“So true, I offered someone water and they didn’t want it. It instantly made me feel slightly offended even tho it was not their intention,” one viewer commented.

“As a good hostess, you BETTER take what I offer,” a second stated.

A third said, “Agree! I always offer water and I have a bowl with sweets by the door at my business.”

Others chimed in, saying Mitterlehner offered “great advice” and a “good point.” Some didn’t see eye-to-eye though, claiming that they prefer when people decline the water.

“As a host, I rather they don’t take the drink! That’s just me,” one user said.

Another viewer wrote, “Nah I’d be relieved they declined. Let’s be real I offered it out of politeness.”

Some users suggested their own explanation of why people should “always take the water.”

“It also allows the other person to ‘help you,'” one user wrote.

“They’re making a bid, it’s how you build the trust bank for meaningful connection. Open the door, smile, hello, all bids,” another user wrote.

Someone else said, “Love this. It’s called a paradigm shift. Look at it as you’re allowing them the enjoyment of giving you something rather than you’re taking something.”

The Daily Dot reached out to Mitterlehner via email.