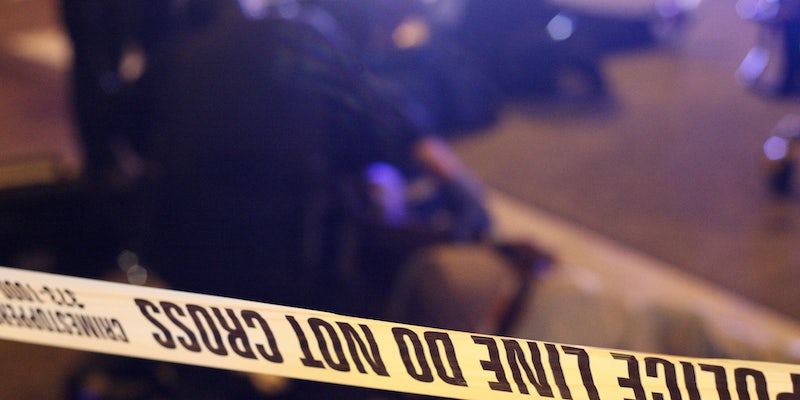 A new video has emerged depicting the police shooting of Alton Sterling.

Fresh footage of the shooting, published in its entirety on Wednesday afternoon by the Daily Beast, shows Sterling’s hands apparently empty at the moment a Baton Rouge police officer draws his sidearm and opens fire into the 37-year-old man’s chest.

Sterling was killed by police on Tuesday night outside of a convenience store in Baton Rouge, Louisiana. A cellphone video captured by bystanders in a nearby car went viral shortly after provoking national media coverage, Black Lives Matter protests, and a U.S. Justice Department investigation.

Sterling, a father of five, appears still breathing at the end of the video, his chest covered in blood, his left arm raised momentarily in the air. He would be dead, however, before medical help arrived.

The Baton Rouge police were dispatched to the convenience store after an anonymous 911 caller reported a black male in a red shirt outside the shop wielding a gun. Muflahi told reporters Sterling sold CDs outside his shop and throughout the neighborhood for years. He also said Sterling had recently starting carrying a gun after an acquaintance was robbed. Louisiana is an open-carry state.

District Attorney Hillar C. Moore, speaking to reporters Wednesday afternoon, said the officers—Blane Salamoni and Howie Lake II—“feel they were completely justified” in shooting Sterling. Baton Rouge police interviewed both officers who were accompanied by their attorneys on Tuesday. The officers have been placed on administrative leave, a safeguard routine after any police-involved shooting.

Police Chief Carl Dabadie Jr., following calls for his resignation by the Baton Rouge NAACP chapter, told reporters he would not be leaving office. The death of Sterling, he said, was a “a horrible tragedy.”

Louisiana Gov. John Bel Edwards announced on Wednesday a U.S. Justice Department investigation led by the agency’s Civil Rights Division. Federal involvement was called for by, among others, Rep. Cedric Richmond of Louisiana, a Democrat, who in a statement raised concerns about level of force applied by the officers as well as their actions in the shooting’s aftermath.

Rep. Garret Graves (R-La.), Baton Rouge’s representative in Congress, called on the authorities to release “all the evidence of the preliminary investigation as quickly as possible.”

Editor’s note: The new video, available here, has been intentionally not embedded in this article due to concerns for Sterling’s family and readers who wish to not view explicit footage of deadly violence.