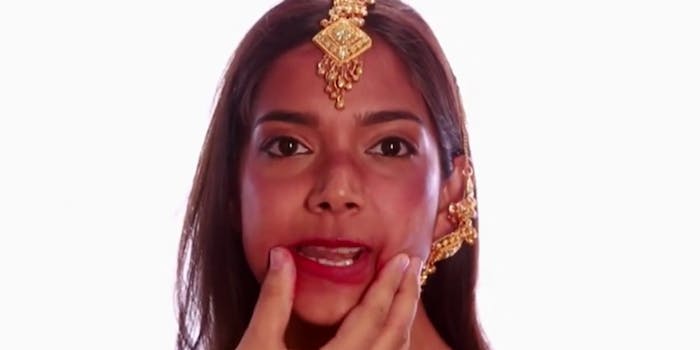 This scathing satire of India’s rape culture is going viral

In the last couple years, police in India have taken more progressive measures in tracking down rapists, but the frequency of sexual assault is still troubling, and blame still rests with women.

In response to that rape culture, India’s sketch comedy troupe All India Bakchod created a parody video called “It’s Your Fault.” Its mission, according to the video description: “Every sexual assault case in India inspires a string of stupid and hateful remarks against women. This is our response to those remarks.”

Two Bollywood actresses offer tips on what not to wear, downplay theories that rape is about power, and touch on some of India’s legal definitions: “Fun fact: If he’s your husband, it’s not rape.”

Through the three-and-a-half minute clip, the women are increasingly bloodied, bruised, and blamed, and the video ends with a series of Indian women repeating the refrain, “It’s my fault.”

It’s racked up close to 250,000 views since Thursday, which is promising if it’s reaching social media in India.

Screengrab via All India Bakchod/YouTube