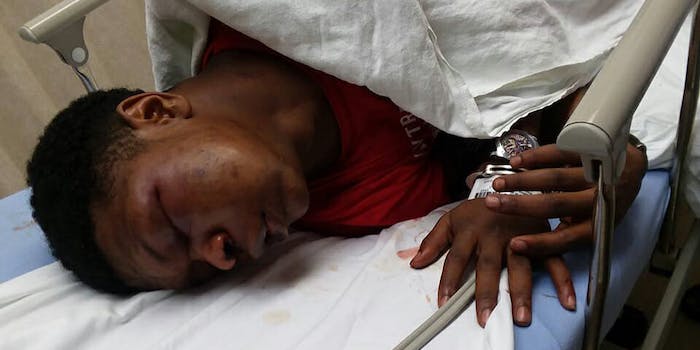 A 17-year-old Alabama teenager was hospitalized after an encounter with police officers.

The family of a 17-year-old boy who was reportedly beaten by police officers in Troy, Alabama, is demanding answers and body camera footage of the encounter.

Ulysses “Fatdaddy” Wilkerson, 17, was brutally beaten by police officers on Saturday, according to his mother. The Troy Messenger reports that Troy police said they used “reasonable and necessary force” to apprehend Wilkerson.

“Troy police officers did this to my son while he was in handcuffs,” Angela Williams wrote.

The photo has since circulated the internet, with many activists calling for justice and requesting the release of body cam footage.

Police said they observed Wilkerson walking out from behind a closed business Saturday night. The officers said when they tried to approach Wilkerson, he fled on foot, and they then pursued him on foot.

Police said they were able to apprehend Wilkerson but that he resisted arrest and refused to comply with commands.

“The subject continued to struggle with officers and kept reaching toward his waistband as if he was attempting to access a weapon, all while repeatedly ignoring officers’ commands to stop resisting and give them his hands,” Police Chief Randall Barr said.

Barr said because of this, the officers resorted to using physical force.

After officers retraced the pursuit path, a handgun lying on the ground was found and has been taken in as evidence. Wilkerson was charged with obstructing governmental operations and resisting arrest, the Messenger reported. The family said the charges were later dropped, according to WDHN.

Wilkerson was reportedly taken to Troy Regional Medical Center and then to the University of Alabama Birmingham hospital. He was released Sunday.

Wilkerson’s father told WDHN “he had trauma to the brain, swelling on the brain, and a cracked eye socket in three different places.”

Black Lives Matter Birmingham has organized a protest for Saturday, Dec. 30 at 11am CT in Troy.

“There comes a time when silence is not an option,” the organization wrote on its Facebook page, calling for justice for Wilkerson.

There comes a time when silence is not an option. #justiceforFatDaddy

Alabama’s State Bureau of Investigation is currently conducting an investigation of the incident between Wilkerson and the police officers, Mic reported.