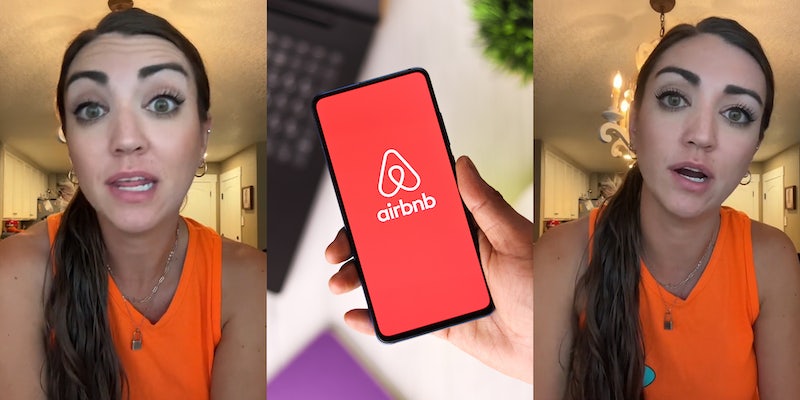 ‘Try not to get scammed, because it’s not fun’: Airbnb guest says host tried to blame $2,500 of damage on them

'This app has made me never want to stay in those places.'

One woman on TikTok is cautioning others against staying at Airbnb or Vrbo lodgings after she says a property owner attempted to hold her responsible for property damage that she did not do.

Posted by user Lauryn Stephens Smith (@laurynsmith308), the video includes her account of having been asked to pay increasing amounts of money by a property owner to make repairs to the home that she stayed in for damage she claims she had nothing to do with.

Initially, Lauryn says in the video, the Airbnb host reached out through alternate channels requesting payment for the damage.

“We just had a host try to blame my group for a bunch of damage in the home that was already there when we checked in,” she says in the video. “She contacted me outside of Airbnb, which is against their policy, and asked for $658 for repair of damages.”

The host said she had to take off work to repair the home, Lauryn says. She responded by telling the host she was not comfortable with her messaging outside of Airbnb and that she would not be paying for the damage—as she says she was not responsible for it.

“Then she went through AirBnB and requested $2,500 for the exact same damage,” Lauryn says of the woman, “now saying that she had to hire a contractor to fix it, even though she told me that she had fixed it.”

The TikToker claims Airbnb initially sided with the host. As the situation escalated, however, she says the charges were reduced to $908, despite what she describes as inconsistencies with the host’s story and video she had taken of the home. Lauryn says she was not made to pay that fee.

To prevent something similar from happening to others who use the service to secure lodgings while traveling, Lauryn recommends viewers take photos of any rental property they would be staying in as soon as they get there, capturing even the smallest thing that a property owner could call “damage.”

In a follow-up video, the TikToker says the alleged damage included paint scuffs, sheetrock damage, a broken lamp, stolen toilet paper, as well as stains on the carpet, curtains, comforter, and ottoman. However, she argues that she and her friends who stayed in the home could not remember seeing the lamp or ottoman and maintained that they could not have done the damage they were being accused of.

While the listing is shown at the end of her video, it appears to have been taken down as it is no longer available on Airbnb.

Some viewers shared that they have had similar experiences trying to use Airbnb or other rental sites, or that they had been discouraged from using the service because of experiences such as this one.

“These people have gotten so greedy with prices, it was meant to be a cheaper option than hotels and now it’s more and I have a chore list,” one commenter wrote. “No.”

“This is why I don’t do airbnb—too many horror stories,” another user said.

“Very similar situation happened to us a couple years back. It was very stressful and upsetting but we fought back and won,” a third added. “Best of luck you!”

The Daily Dot reached out to Airbnb via email regarding the situation, as well as to Lauryn via a comment on the video as other methods of contact could not be identified, regarding the video.

Update 2:36pm CT Oct. 7: In an email to the Daily Dot, an Airbnb representative reiterated that Lauryn was not held financially responsible for the damages.

“Our team reviewed this case thoroughly and determined that there was not enough evidence to hold the guest responsible for the claimed damages,” they said.