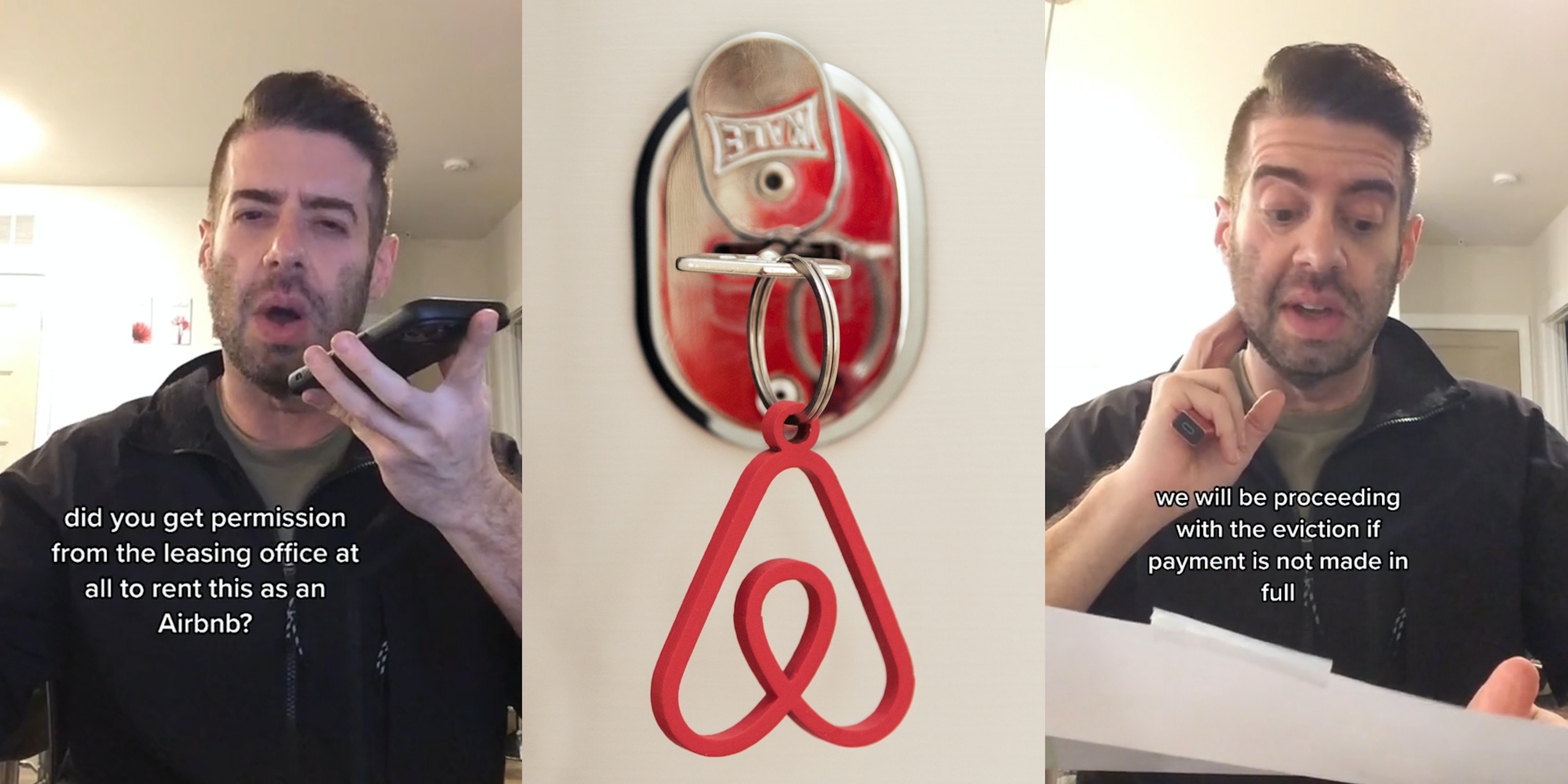 'This is actually worse than I thought.'

An Airbnb guest says he found out the host did not have the authorization to sublet the apartment on the platform after receiving an eviction notice from the complex.

Aura reports that nearly a quarter of all complaints with Airbnb rentals are due to scams, or renters selling stays to customers when they don’t have the authority to do so. This could either be a violation of their leasing agreement, someone who gained access to an apartment that they don’t legally own, or a variety of other fraudulent bookings that often leave paying guests out in the cold.

The guest, TikTok user Mike Bishop (@mobizzles) states that he was a victim of one of these scams while staying at an Airbnb he booked after his own condo flooded.

In the video, he records himself detailing the situation while leasing officers come and knock at the door, informing him that he is an unauthorized guest on the property. They also allegedly state that the man whose name is on the lease, Steven, owes several months of back rent and is being kicked off the premises.

“I’m sorry is this Victoria?” Bishop says, calling the Airbnb host. “Hi Victoria, this is Mike, the guy who’s staying in your Airbnb. So curious thing, I had about 4, maybe 5 people from the leasing office knock on the door. At first, they expected Steven to be here, so they were like, ‘Oh sorry. Wrong apartment.'”

However, Bishop notes that the leasing office employees returned and asked if he was subleasing the apartment.

“I told him that I was a friend, because I kind of put two and two together,” he explains to the host. “Did you get permission from the leasing office at all to rent this as an Airbnb?”

While Victoria’s answer can’t be heard in the video, the TikToker does place a text overlay delineating the response she allegedly had. “So as far as that goes, I wouldn’t be able to answer that question for you, ’cause I am not on the lease at all,” Bishop claims she told him. “I am a consultant considered a co-host. I do not really do much with the unit. The other answer, like questions and things, if you need anything and stuff like materalistic wise, I would definitely recommend that you call Steven.”

As the video progresses, the TikToker response indicates that she has told him that Steven, whose name is on the lease of the apartment, is out of the country. “I have somebody knocking at the door right now,” he states while on the phone call with the woman.

Sure enough, it’s the leasing office coming in to investigate further. According to a text overlay in the video, this is the third time they’ve come by the apartment to speak with him.

A woman can be heard speaking off-camera to Bishop at the door. “This is for Steven and it’s extremely important that he gets it, OK so if you don’t mind…,” she says.

The TikToker tells the woman that the man is out of the country but that he should be back within a day or two and that he would give it to him as soon as he sees him. The woman then says, “I’m not telling you to open it but if you want to open it and let him know what it says, that’s OK too.”

Bishop appears back on camera tapping an envelope in his hands. “So the leasing office just handed me this letter. I’m trying not to freak out, and I’m gonna open it,” he says.

He then reads the notice. “This is actually worse than I thought,” Mike claims.

The leasing office allegedly tells Steven that he owes them over $18,000, and he hasn’t submitted a payment to the company since July of 2022. “

“We will be proceeding with the eviction if payment is not made in full. Please contact us,” Bishop says, reading the notice. “Additionally, upon visiting your home today we met an unauthorized occupant and a dog that is not listed on your lease agreement.”

The TikToker worriedly looks down at the letter before stating, “Can’t get any more real than this.” The video then cuts to him filling up a cup of ice and pouring some liquor into it.

The TikToker seemed extremely stressed about the whole situation, which confused some users on the platform as the leasing department was going after Steven for the money and not him. In a follow-up video, he explained why he was so worried.

He recorded the clip from a hotel, not the Airbnb he was previously staying at.

“I think that anybody would be stressed out in this situation,” he explains. “First, my condo flooded on New Year’s Eve. I was moved to a hotel. The hotel didn’t have fast enough internet to do my job, and the kitchen was sort of shit, and I cooked most of my meals at home because I have a very specific diet. So then, I set up to get into this Airbnb.”

He adds that the process for booking the Airbnb was slightly more complicated as he had to set it up through his property insurance. “They are always hesitant about doing that, because they say they can’t get a full refund if something bad happens,” he explains. “They just wanted me to make sure that everything was like fine before I moved in. So I move into this Airbnb and I’m in there for about 10 days.”

He adds in a text overlay that it was actually 14 days, though he had booked the apartment for a month. The morning he received the eviction warning, he says he was planning on extending his stay for another month, due to remaining issues with his condo.

Bishop also says he does not travel light, which made the situation even more complicated.

“Not only did I bring all of my clothing from my flooded condo with me because I didn’t want it to smell like mildew or mold, I also brought my dog’s portable crate,” he says. “I brought my rice maker. I literally had just gone to Costco and filled the refrigerator full of groceries. One of the more ridiculous things I did was because of there being nowhere comfortable to sit in that Airbnb, I had bought an armchair off of Facebook marketplace and brought it into the Airbnb.”

All of these factors contributed to Mike’s heightened levels of stress in dealing with the situation. Not only was he dealing with being on the receiving end of what could be perceived as a scam from an Airbnb renter who wasn’t allowed to use the apartment they were leasing as a miniature hotel, but he now has to move all of the stuff to a new temporary living situation.

Bishop says that he did find another Airbnb to stay in afterwards, which he would be moving into the following day. He adds that Airbnb did indeed refund him for the rest of his stay that he couldn’t complete, and he contacted Steven about the mishap.

The Daily Dot has reached out to Airbnb via email and Mike via TikTok comment for further information.