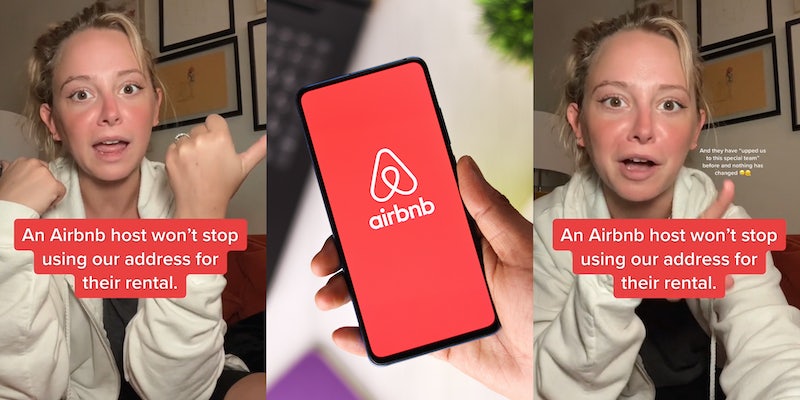 ‘People will show up here at the most random hours… trying to enter their Airbnb that does not exist’: TikToker says Airbnb host uses their address for scam listing

'It sounds so scary to have random people trying to enter your house all the time.'

A TikToker in California claims her address is being used in an Airbnb scam and that the company is doing nothing about it.

In a video, Tepper (@teppertalkstv) says the situation has been happening for a while.

“People will show up here at the most random hours and start trying to get into our back house area and enter their Airbnb that does not exist,” she says in the clip, which has almost 50,000 views.

Tepper claims she and her roommate have contacted Airbnb about the issue but that the company said they couldn’t do anything about it because they couldn’t find the person posting the fake listing.

However, the TikToker says a couple recently provided her with a link to the listing, which she sent and sent to Airbnb, who connected them to the “specialist team” to help them out.

Airbnb scams are rare, according to the company’s website, but can put a damper on any vacation. Posts dating back to 2017 on Airbnb’s website mention scam listings, and the company wrote a blog post earlier that year detailing its process for preventing scams.

Viewers in Tepper’s comments chastised Airbnb and tried to offer solutions to the TikToker.

“I wonder if you could file a police report? Especially since AirBnB clearly isn’t taking it seriously,” one user said.

“It sounds so scary to have random people trying to enter your house all the time,” another user wrote.

“I’ve had this experience and let me tell you – they will never take it down. Ever,” said another.

The Daily Dot reached out to both Airbnb and Tepper via email.