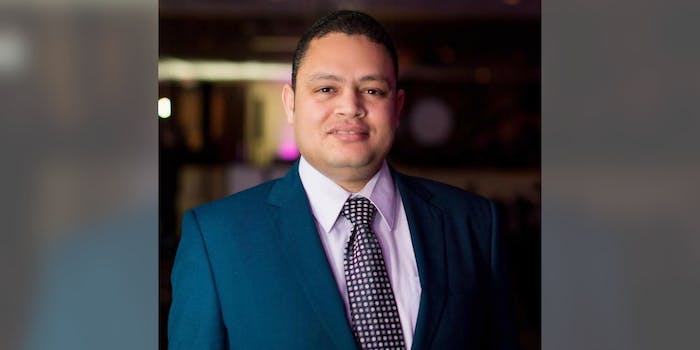 His students are fighting for his freedom.

A New Jersey teacher who faces a death sentence in Egypt for his activism has been detained by U.S. Immigration Customs and Enforcement (ICE) despite having previously applied for political asylum.

According to HuffPost, six ICE agents detained 33-year-old Ahmed Abdel-Basit Mohamad on April 5 as he left his home for work. Mohamad, a physics teacher at private K-12 school Rising Star Academy in Union City, was placed in detention on “administrative immigration violations.” ICE did not elaborate to HuffPost on the details of those violations.

According to Mohamad’s lawyers, he does not have a criminal record in the U.S. He arrived in the country in June 2016 after helping organize peaceful protests against the military’s removal of Egypt’s first freely-elected president in July 2013. Mohamad had been a doctoral student, physics professor, and activist at Cairo University at the time, and was expelled from the institution in June 2014.

In May 2016, a military court sentenced Mohamad to death in absentia, a sentence that Human Rights Watch has called “completely baseless” with “almost non-existent” evidence. Following his arrival in the U.S. on a visitor visa, Mohamad applied for asylum that August, and was interviewed for the status last April. Though his visitor visa expired, Mohamad was allowed to work in the U.S. with his pending asylum decision, which he was told would arrive in the mail.

However, three days after Mohamad’s detention, a notice arrived at his mailing address that his asylum case had been transferred to an immigration court.

Mohamad’s physics students have launched an online petition, website, and social media campaign. They’re urging for others to follow them in contacting lawmakers and pleading for their teacher’s release. The online petition, created less than 24 hours ago, has so far surpassed 1,300 signatures.

Everybody please go CALL and RETWEET. I know a lot of you did this to save net neutrality, now do it to save a man’s life. Feel free to tag more popular pages that will possibly share. @lsarsour @CoryBooker @SenatorMenendez @UnheardEgypt @TheVoiceEgypt @EgyptNews_en pic.twitter.com/NesWH0XAni

Mohamad’s lawyer, Anwen Hughes, says ICE’s unexplained detainment of his client speaks to a larger phenomenon of the Trump administration targeting all immigrants, both undocumented and documented. In 2017, ICE arrested 171 percent more immigrants without criminal records than in the previous year.

“If they send me back to Egypt, I will be hung right away,” Mohamad told HuffPost from the detention center. “Everything is damaged. Everything.”

Read the entire piece on Mohamad’s detainment and his students’ efforts at HuffPost.