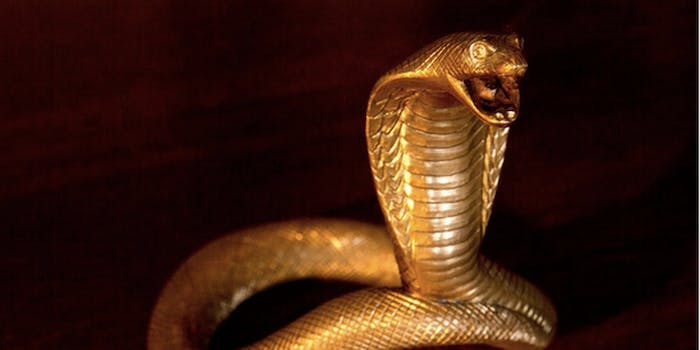 Considering that orgasms are on a very, very short list of things in this world you can actually get for free, it seems outrageous that AHAnoir exists. And yet…

Launched as an offshoot to online luxury store AHAlife, AHAnoir is a high-end sex toy and boudoir accessory marketplace that’s like a steamier version of GOOP, but equally out-of-touch and elitist. Created by AHAlife founder Shauna Mei, the website sells, among other things, a $585 gold-tipped mask-and-handcuff set, a $37,000 silk tulle diamond garter, a $732 strawberry-shaped anal stimulator (which looks like something that would come with a $20 chain necklace at Anthropologie), and the aforementioned $15,000 “King JCobra gentleman’s ring” (“gentleman,” in this context, is not being used in the Regency-era, top hat-and-tails, “oh, dear me, Mr. Darcy!” sense of the word, but rather in the same context as “gentlemen’s club”).

Now, is there an audience for these kinds of high-end luxury products? Indubitably: Mei tells Fast Company that high-end sex toys were among the best-selling products on AHAlife, with such items racking up an average order value of $150. But considering that orgasms are on a very, very short list of things in this world you can actually get for free, it seems outrageous to charge so much for something as simple as a cock ring, especially when you envision the kind of couple that would blow so much cash on such an item (I’m guessing white, San Francisco-based, in the tech industry, wife swears she’s not racist but installs nannycams to try to catch the maid stealing).

The premise of AHAnoir is even more offensive considering Mei’s motivations for creating the site: to create an online environment for wealthy consumers explore their sexuality, without those vulgar, crass advertisements and photos us plebes shopping for sex toys encounter on a daily basis.

Sorry it skeeves you out, Shauna. As for the rest of us unwashed rednecks, we’re perfectly content buying our masturbatory aids for less than $15,000 at Adam & Eve, Babeland, Good Vibrations, or mall novelty stores, thank you very much.