No one is happy about these ‘beach body’ protein-powder ads

A Change.org petition to have the ad removed has gotten thousands of signatures. But the company isn't backing down.

We can all agree that there’s pretty much nothing as ridiculous as the term “beach body.” While it’s supposed to connote a body that’s lean, toned, and lacking in excess fat, in reality a beach body is any body that happens to be at a beach. That’s why people are so outraged by this ‘beach body’ protein powder ad that’s been popping up in tube stations around London.

The ad for Protein World’s Weight Loss Collection features a toned blond woman in a bikini, accompanied by the question: “Are you beach body ready?” 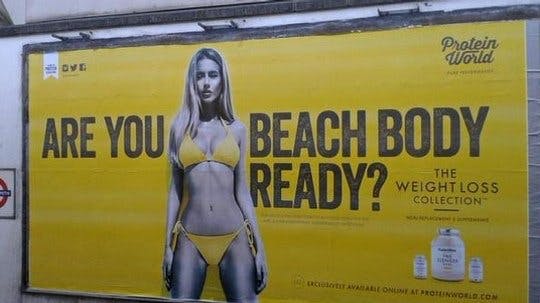 Naturally, feminists are outraged by the ad, arguing that it promotes unhealthy and unrealistic female body standards. A Change.org petition to have the ad taken down has garnered more than 45,000 signatures.

Launched by a woman named Charlotte Baring, the petition reads: “Protein World is directly targeting individuals, aiming to make them feel physically inferior to the unrealistic body image of the bronzed model, in order to sell their product.”

Some feminists have also defaced the ads in protest.

The ad features Australian model Renee Somerfield, who defended it in an interview with Huffington Post UK.

“I think nearly every ad campaign you have ever seen is open to interpretation. But saying the ad is body shaming by body shaming the image is very contradictory,” she said. “Two wrongs don’t make a right.”

For his part, Protein World’s head of marketing, Richard Staveley, is thrilled by the controversy generated by his campaign.

‘I think it’s fair to say we weren’t expecting this level of exposure,” he told Sky News. “But it’s fantastic.”

@lawrencedarcy This is not feminism, it is extremism. #getagrip #BeachBodyReady #Winning 👍🏼

Apparently, the controversy  over the beach body ads has been good for business. Seth reports that Protein World now has 20,000 new Twitter followers and sales of the supplement are going up “significantly.”

But here’s the real takeaway from this story:

So many horrible things happening in the world and people are getting way too worked up over a poorly thought out poster for protein.