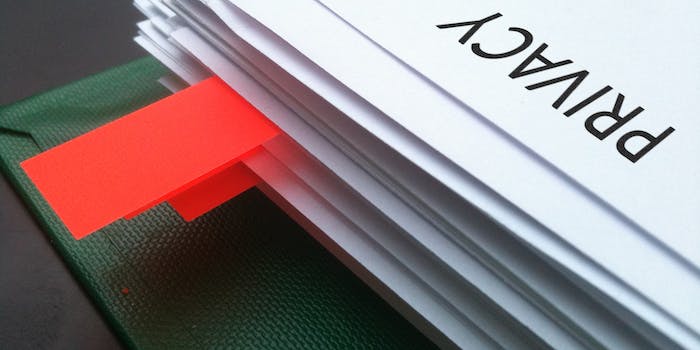 'When Congress doesn’t act, the states often feel the pressure directly to insert themselves into that void.'

Lawmakers in 16 states and the District of Columbia have prepared a bundle of more than 30 bills that aim to protect Americans’ digital privacy.

On Wednesday, a bipartisan coalition of state and D.C. legislators will unveil legislation designed to protect consumers, students, and citizens from what they consider a void left by the absence of federal digital privacy laws.

“We think it’s essential for states to draw a line in the sand and say that your information is only going to be collected with your permission or a warrant,” Michael Boldin, the executive director of the Tenth Amendment Center, said on a Wednesday media call announcing the effort.

Lawmakers in eight states are introducing bills limiting the social media information that employers can demand of job applicants. Three state bills will address law-enforcement agencies’ use of cell-site simulators or “stingrays,” devices that mimic cellphone towers to track phones’ locations. And four state legislatures will follow California’s lead by developing their own versions of the federal Electronic Communications Privacy Act.

Other bills will extend warrant requirements to students’ personal devices while they are on campus, ban schools from requiring students to provide administrators with access to their social media accounts, and require police to quickly delete automated license-plate reader data on individuals not suspected of crimes.

“Privacy is paramount in every state to individuals,” Michigan state Rep. Peter Lucido (R), who is sponsoring several bills, said on the media call.

Anthony Romero, the executive director of the American Civil Liberties Union, which is coordinating the nationwide effort, pointed to California’s ECPA bill as a model for the campaign. Despite vast bipartisan support for reform, the federal law has gone unamended since its passage in 1986. But California passed its own version in October, modernizing language written long before the rise of modern forms of communication.

“When Congress doesn’t act, the states often feel the pressure directly to insert themselves into that void,” Romero said during the call. “I think this is a very welcome response. … It’s a welcome signal that change will come.”

California’s ECPA law, Romero said, was a “turning point.” Its passage “set the ground for the changes that we’re trying to pursue in these more than 30 bills in various [states].”

The vast state-level campaign, which is organizing around the Twitter hashtag #TakeCTRL, is likely to result in piecemeal success, as well-funded pro-business coalitions push back on reform-minded lawmakers. But in Michigan, Lucido predicted success for his legislation to rein in the use of location-tracking technology by law enforcement. He said that the chairman of the Michigan House Financial Services Committee, on which he sits, told him that “there is definitely a need for privacy.”

“The support is there,” Lucido, who also sits on the criminal justice and judiciary committees, said during the press call. A bipartisan group of his colleagues “are united, they stand together, and they walk in lockstep all the way to the capitol steps to say these are good bills [and] these are bills that need to be passed.”

The hope is that strong privacy laws in some states will encourage other states to toughen their standards. Romero described the process as raising the “floor of protections” offered by the overall legislative environment, so that the sponsors of new bills would feel the need to start at that level.

“It becomes increasingly impractical for Google to have 50 different standards or privacy standards across the states,” he said. “They’re going to want to look at what do they need to do to ensure compliance across all the states.”

Organizers of the national coalition stressed the bipartisan nature of their effort during the media call. In Alabama and Minnesota, state ACLU branches are working with conservative groups like the Eagle Forum and the Republican Liberty Caucus.

“There’s no issue outside of privacy that generates this kind of left–right support,” Boldin said. “We just don’t see it on anything.”

Whether or not any of the bills become law, the very existence of the coalition is a promising sign for privacy activists that growing unrest with federal inaction can produce results.

“This is increasingly a momentum that you see that’s building not just in blue but also in red states,” Romero said, “where the state legislators and governors are tired of waiting for Congress to act.”

Photo via  Morten Oddvik/Flickr (CC BY 2.0) | Remix by Jason Reed