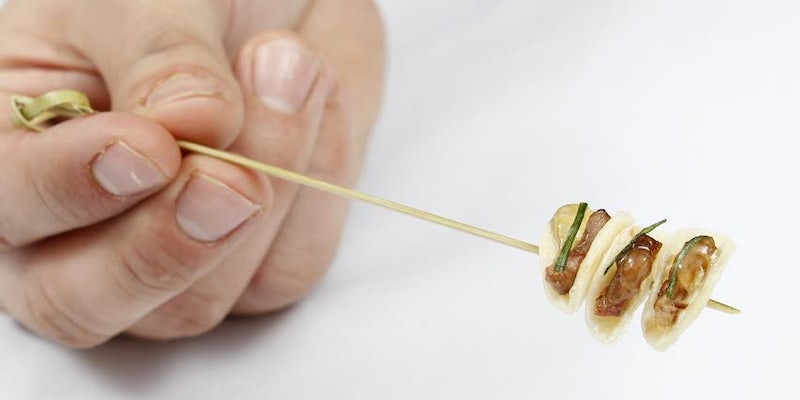 If you thought the Cronut was ridiculous, wait till you see Abbrev’s

There’s this cool new restaurant in Austin that’s about to be so popular, reservations are impossible to get. Literally.

That’s because the genius idea of Abbrev’s is just a false front for an eatery that doesn’t exist. For co-creator Danny Palumbo, the pretentiousness that comes with many of today’s over-the-top dining experiences provided the perfect fodder for some Web satire. His first shot across the culinary bow in 2014 lampooned the concept of a snobby restaurant for kids.

“My brother is a chef, and I’ve been a cook for about 12 years,” Palumbo told the Daily Dot. “A mutual chef friend on Facebook had posted a dish titled ‘Deconstructed BLT’ and it was romaine lettuce, pork belly, and heirloom tomato separately on a plate. I thought it was just ridiculous. Like, why are you doing this? We talked about it, and it just evolved into this idea to cook and plate kids’ food super pretentiously.”

Palumbo, a stand-up comedian, took his skills for making people laugh to his faux food destination with elaborate details. For Abbrev’s, which serves portions so small you can eat them without opening your mouth, the prep work (the website, not the food) required a lot of painstaking attention to detail.

“The prep for Abbrev’s took a pretty long time. We got to my brother’s kitchen five hours before the photographer showed to get it done,” Palumbo added. “I made a ravioli the size of a dime and put a bunch of foie gras tacos on a skewer. It was a pain in the ass.”

For an added touch of authenticity, Palumbo recreated the stereotypical image of the modern chef who cares more about experimental cuisine than making customers happy. Both in his social media presence as well as on the Abbrev’s website, there’s the iconic foodie genius, arms crossed, covered in food-related tats with the words “I’m a chef” inked across his fingers, politely folded on a table. It’s difficult to miss the artistic homages to Gordon Ramsey and the Hamburger Helper icon that decorate his arms.

By the way, the ink is not real. “They are fake tattoos,” admitted the comedian/chef. “Allie Amrien, a super funny comic in Austin, did them. I just let her go nuts. So stupid. I was covered in Sharpie for a few days because I’m an idiot.”

An idiot perhaps regarding his faux tattoos, but Palumbo is dead-on in his menu lingo on the Abbrev’s site, where all the dishes are abbreviations, natch. Here’s how the menu explains the idea for less-than-minimalist dining.

Abbrevs is another one of our heavily financed concept restaurants. At Abbrevs, we serve abbreviated versions of food. Each dish is less than a bite, not even a morsel. A minimal nourishment restaurant with a focus on leaving you still hungry—the hope is to create an entirely new dining experience where the “eater” is only somewhat satisfied but thoroughly intrigued.

Palumbo has no particular endgame in mind for his hilarious side project other than, as he said, “cracking people up.” If someone offers up a compliment that deems Abbrev’s a stroke of brilliance, this clever Austinite would not object.