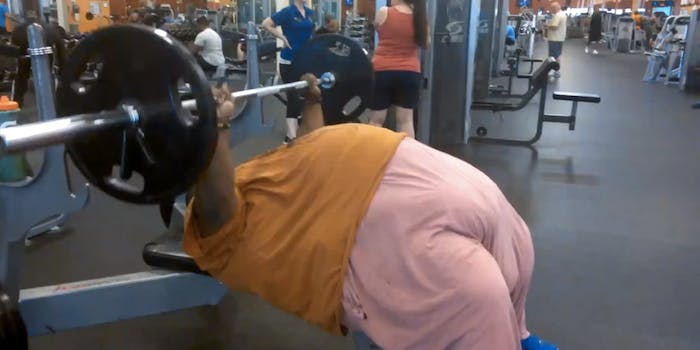 Let this 798-pound man be your workout buddy on Facebook

Team Larry will not quit!

Larry Evans wants you to know he’s working out. The 798-pound St. Louis resident began sharing his daily workouts on Facebook 141 days ago, attracting more than 62,000 fans to his page. Theyr’e there to cheer on Evan’s progress, where he serves as an insipiration and keeps and upbeat attitude with mottos like “get up get out and do something” and ‘#getfitdontquit.”


His most popular videos like the one above top out at over 20 million views, with 96,000 comments. While not all are positive, Evans choose to focus on his supporters and continues to update frequently.  Even the gym where he works out has gotten in on the act, putting up signs about #TeamLarry and asking for other gym goers to donate healthy foods for Evans to eat to support his transformation.


While he hasn’t revealed how much weight he’s lost so far, he’s posting before and after pictures that definitely show progress. It’s safe to say we’re all on #TeamLarry.