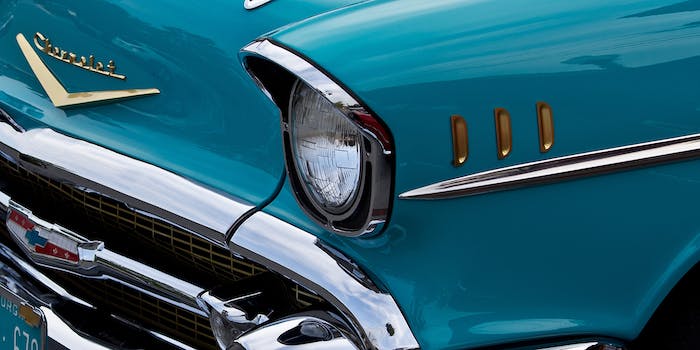 Son surprises dad with ’57 Chevy on his 57th birthday

As an 8-year-old in Kentucky, a redditor called Belairboy promised his dad, who was born in 1957, that he’d buy him a ’57 Chevy for his 57th birthday. Years later, he kept his promise.

The Bel-Air was his dad’s dream car. Belairboy writes that his dad grew up in a working-class family of seven children, and while he talked about the Bel-Air “all the time,” he “knew he would never be able to” own one.

“I never forgot and was able to fulfill my promise,” Belairboy wrote on Reddit. He explained that two years ago, working in a factory with unlimited overtime, Belairboy worked 60-hour weeks to save up money for the car. He kept it in storage until his dad turned 57. Meanwhile, he kept showing his dad images of the Bel-Air he’d bought. Dad “would get so excited.”

Then, while the two were rigging a cornhole board, Belairboy opened the garage door. Here’s his dad’s reaction.

Thanks to Reddit, there’s now a GoFundMe campaign to help Belairboy’s dad restore the car.

“My dad has been everything to me,” Belairboy writes. “He is not my biological father but he IS my father. But this man in this video, my DAD my FATHER, was the best thing that ever happened to me and my mom and I hope I can be a fraction of the man that he is.

“My real father abandoned me and my mother when I was a child, so I understand to a degree how some of you in the comments feel and I am sorry if this video was hurtful in any way.”

And in response to the comments complaining about the vertical video: “My sister said [she’s] sorry for having the camera turned the wrong way.”

Here’s the full album of the Bel-Air: