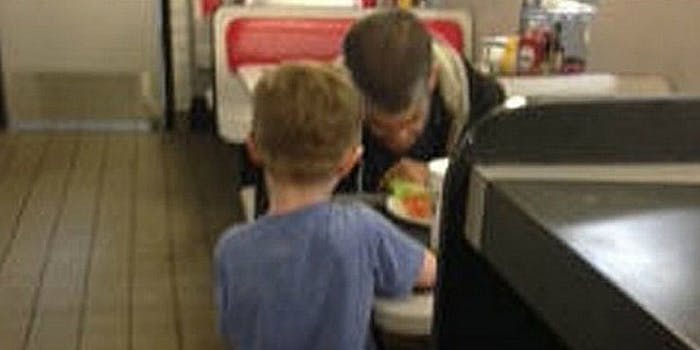 We should all be so lucky to have a child as thoughtful as Josiah Duncan.

Five-year-olds seemingly ask questions non-stop. Sometimes, those queries make their parents uncomfortable—what happens when we die, how do babies get into mommy’s tummy, why are we driving so fast that policeman behind us wants us to pull over? But when that parent can give a direct answer, it can make a huge difference to someone in need.

Thus, when 5-year-old Josiah Duncan recently spotted a man outside a Waffle House restaurant in Prattville, Ala., with only a bag and a bike, he asked his mother, Ava Faulk, a question about him. Faulk told her son that he was homeless, and Duncan asked what that meant.

After she explained it, though, Duncan—apparently troubled by the idea that this man had no food to eat—had a request for his mom. Buy this man a meal, he told her.

“[The man] came in and sat down, and nobody really waited on him,” Faulk explained. “So Josiah jumped up and asked him if he needed a menu because you can’t order without one.”

The man insisted on a cheap hamburger to start, but he was assured he could have anything he wanted. He got the works.

“Can I have bacon?” Faulk remembers him asking, “And I told him get as much bacon you want.”

Before the man could take the first bite, Josiah insisted on doing something.

“I wanted to say the blessing with him,” Duncan said.

When the pre-meal blessing was complete, there apparently wasn’t a dry eye in the place. And Josiah’s actions filled his mother with pride.

“You never know who the angel on Earth is, and when the opportunity comes you should never walk away from it,” Faulk told the TV station. “Watching my son touch the 11 people in that Waffle House tonight will be forever one of the greatest accomplishments as a parent I’ll ever get to witness.”