My failed quest to tie a tie 30 different ways

I got all tied up trying to prove I know my way around a knot.

Sitting in my friends’ living room with a borrowed length of limp silk, biting my lip at YouTube tutorials, I quickly regretted my rash decision to try to elevate my non-existent neckwear game.

ShirtsMyWay, a website devoted to custom dress shirts, collected 30 ways to tie a tie, ranking a variety of knots based on symmetry, knot size, aesthetic, and difficulty. Up for a challenge, I wondered: How hard could knot-tying really be? The Internet can teach you how to do anything. Plus, I can tie my shoelaces just fine.

As a cisgender female who has very rarely dabbled in gender-queer presentations, I’ve never tied a tie before, and definitely never considered anything beyond the basic knot. I began the experiment ambitiously, figuring I could tie all 30 knots ShirtsMyWay suggested, but quickly a combination of frustration and exhaustion wore me down, as did my lack of sophistication. So many of the knots looked completely identical to me! I decided to opt for a mix of key standards and out-there variations to challenge myself.

My first attempt was the Eldredge Knot, with both high aesthetics and difficulty. The resulting knot has a fishtail appearance, and it’s the kind of knot I would want to make if I regularly wore ties. In round one, I clearly bit off way more than I could chew. I almost immediately ran out of slack and produced something that looked more like a fisherman’s tangled line than an elegant braid.

Next up, the Trinity, described as resembling the Celtic Triquetra, which I had to look up. Despite my failed first attempt, I was extremely optimistic and before getting a good look at my finished product, I assumed I’d done this one perfectly. This was not true. I’d done better than round one, but missed a few flips and turns, so my tie was half-backwards and twisted. Definitely not something I could leave the house sporting.

The Van Wijk was my breakthrough. A cylindrical twist, I picked up on this quickly. Admittedly, it has the lowest difficulty rating of the bunch, but that did not diminish my pride at actually tying a knot I could show another human being without shame. Energized, I soldiered on.

Now I was getting cocky. I went searching for stranger knots to attempt, and found the Merovingian, originally known as the Ediety Knot, but renamed thanks to The Matrix. It was described as, “It looks like your tie is actually wearing a little miniature tie.” A lover of all things miniature, I had to try. Predictably, it was a mess. The less said, the better.

The Linwood Taurus was described as a statement knot for casual occasions only, which is sort of a juxtaposition. It also looked like a hamburger to me, and I was hungry. One of the biggest problems during the knot experiment was my long hair getting caught in the complex twists and turns of the silk. No wonder men keep their hair short! This was my second best knot, mostly because it erred on the side of loose by design, so I had more wiggle room.

At this point, I threw in the towel, although I did capture some of my most confused and triumphant faces for your viewing pleasure. 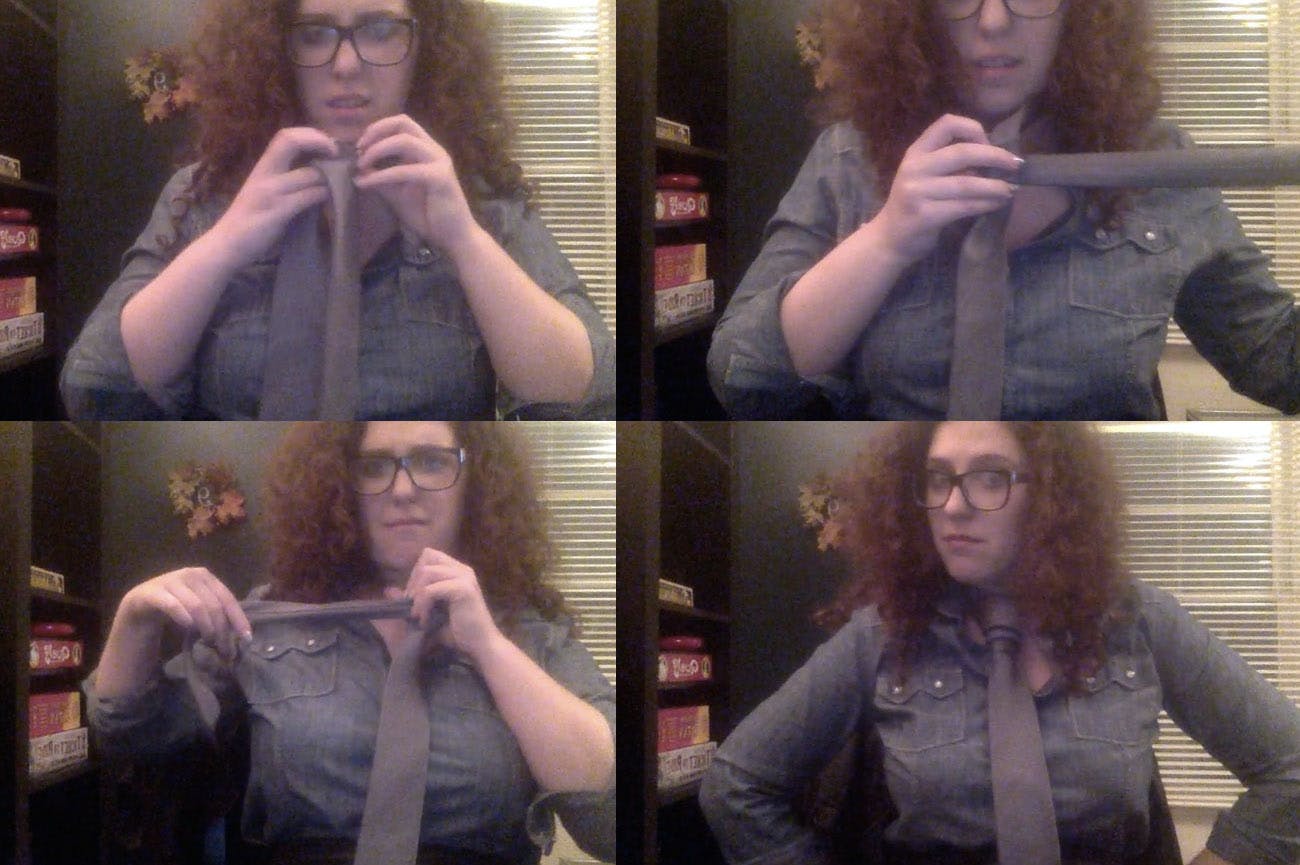 I can definitely see the appeal of mastering a variety of knots to spice up your neckwear, but it would take a lot of practice to move me out of Amateurville. I’ll stick to jewelry, my preferred form of neck decor.