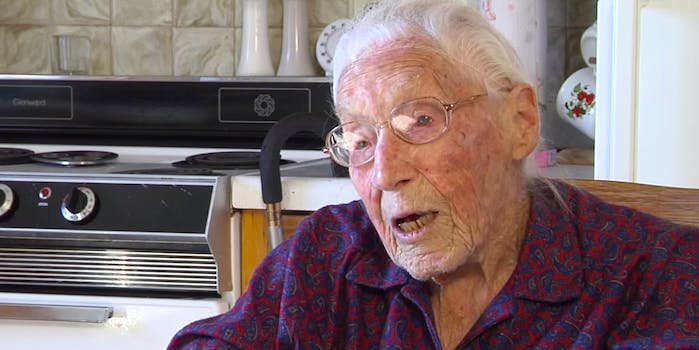 Anna Stoehr joined Facebook just days before her 114th birthday, but first she had to shave off a few years.

Anna Stoehr joined Facebook just days before her 114th birthday, but first she had to shave off a few years.

She’s been recently learning how to use modern technology after striking up a friendship with the Verizon sales rep who recently sold a smartphone to her 85-year-old son. Ever since, he’s showed her how to Google, use FaceTime on her iPad, and even join social networks to communicate with people around the world. Except when she tried signing up for Facebook, she ran into a snag.

While many younger Facebook users may lie about their age to access the site before they turn 13, Stoehr had the opposite problem. When she tried to select her birth year, 1900, from the dropdown menu, it wasn’t available; the earliest year you can choose is 1905.

So Stoehr cut off 15 years and chose to be a young and robust 99. And then she wrote Facebook a letter on her typewriter: “I’m still here.”

Now she’ll be celebrating her centennial birthday all over again.