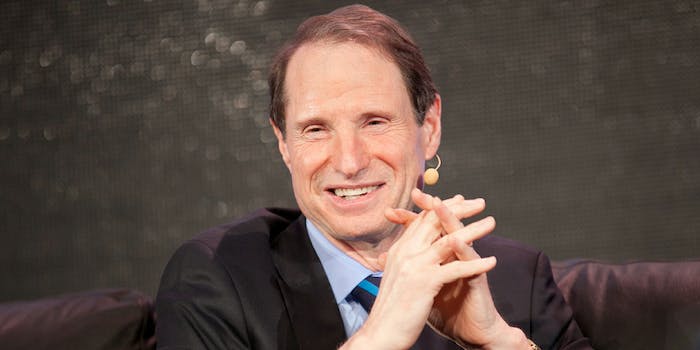 Wyden joined Booker on Facebook Live to discuss the bill

Sen. Ron Wyden (D-Ore.) has signed on to the Marijuana Justice Act, first proposed by Sen. Cory Booker (D-N.J.) in August of this year.

“I’m proud to join forces with Senator Booker to fight this administration’s attempts to shift our country into reverse when it comes to federal marijuana policy. It’s more important now than ever to update outdated policies, right the wrongs against communities of color, and continue our work to lift up the voices of the many Americans who are speaking out in favor of legalization,” Wyden said in a statement.

The bill would remove marijuana from the federal list of controlled substances, legalizing it on a federal level. It would also encourage states to legalize the drug by providing funding for communities in need.

Booker and Wyden discussed the bill via Facebook Live last week, specifically the effect of current drug law on marginalized communities. Both men cited the disproportionate effect of current marijuana laws on communities of color and on poor communities and criticized Attorney General Jeff Sessions’ attempts to bring back the War on Drugs.

“Jeff Sessions and the Trump administration are still trying to fight a 1980s drug war that is socially unjust, economically backward and against the will of the American people,” Wyden said.

The bill would also expunge federal pot use and possession crimes, and allow anyone currently serving time in prison for a federal marijuana-related offense to petition the court for resentencing.

Federal drug policy has long come under scrutiny for disproportionately affecting poor communities and communities of color. A study published by The Sentencing Project in 2016 cited harsh drug laws as a major factor in the disproportionate punishment of Black and Latino populations.

The Marijuana Justice Act would penalize states that have not legalized marijuana, and which have drug arrest rates that disproportionately affect people of color and poor communities. It would also provide $500 million each year until 2040 for communities most affected by the War on Drugs, including funds for job training, public libraries, youth development programs, health education and community centers.

Both Wyden and Booker have been critical of Jeff Sessions and his renewed push for harsh drug policies. In August, Wyden wrote to the Attorney General demanding the release of the President’s Task Force on Crime Reduction and Public Safety’s recommendations on marijuana policy and slamming Sessions for his secrecy on the matter. And Booker spoke out against the harsh sentencing the DOJ proposed in a May memo.

While the bill has little chance of passing, it does create “a national conversation,” Jim Moore, the director of the Tom McCall Center for Policy Innovation at Pacific University, told the Statesman-Journal. While there are still legislators on both sides who oppose marijuana legalization, states have led the charge to decriminalize or legalize pot in recent years.

But come 2020, “It could end up becoming a very interesting political plank,” Moore said.