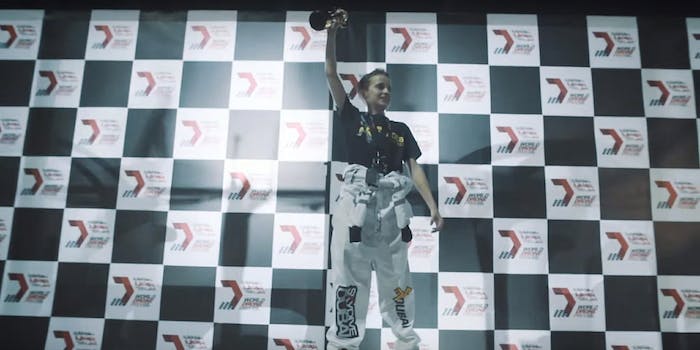 This might be the most high-tech sport on the planet.

Drone racing is the hottest, newest sport around and it already has its first young phenom. A 15-year-old took home first place–and $250,000—at the inaugural World Drone Prix in Dubai.

Luke Bannister, the British teenager who captured the title, took on the competition as part of his team Tornado X-Blades Banni UK. Bannister and his fellow pilots beat out competition from 150 other teams to win the largest purse from the prize pool of $1 million.

The path to victory required Bannister to successfully direct his drone through an elaborate course and soar through a series of hoops. Rather than watching the drone from the ground, the race requires pilots to fly from a first-person perspective using specially designed headsets that display a view from a camera mounted on the drone.

The inaugural race in Dubai was one of the largest drone racing events in the sport’s young history. Over 2,000 reportedly turned up to watch, with many on hand to root for the hometown team Dubai Dronetek, which took home second place.

Drone racing seems likely to only get bigger from here, with major investors pouring money into it. Stephen Ross, a property developer and owner of the Miami Dolphins, has already placed $1 million on the sports’ future, while Muse frontman Matt Bellamy has also invested in the league.

But drones won’t be the end of the new futuristic sports competitions; Dubai announced its intentions to host the World Future Sports Games in December 2017, which will include events like robotic swimming, running, wrestling, and car racing.