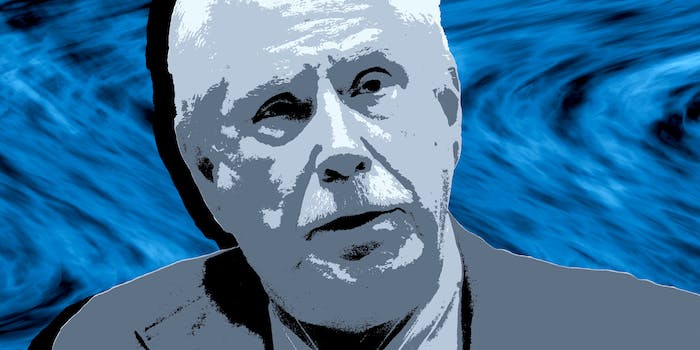 You can be forgiven for not knowing who Mike Gravel is, even though he spent all last night earning the affection of left-leaning Twitter. Gravel is the former Democratic senator from Alaska who garnered a tenth of a percent in the New Hampshire presidential primaries in 2008 before bowing out and ran on an anti-imperialist platform.

And yet, #GravelGang is suddenly a thing online.

Mike Gravel, it appears, is back. A populist progressive, Gavel has lobbied for direct democracy, universal healthcare, and withdrawal from entanglements abroad. He may have minimal name recognition, but he blew up Twitter by announcing he was running for the Democratic nomination, attacking just about every 2020 candidate for their inadequate stances on policies he’s held for a long time.

And his tweets are gaining popularity. Gravel went after Sen. Cory Booker (D-N.J.) for Booker’s performance in the Brett Kavanaugh confirmation hearings, highlighting his own activism on the Senate floor.

And he attacked Sen. Kamala Harris (D-Calif.) for her support of the death penalty. Gravel’s also not terrible at pushing his ideas memetically, especially given that he’s 88.

And he worked in a solid dig at Amy Klobuchar.

There was even an explicit call for the jailing of Henry Kissinger, Dick Cheney, and Elliot Abrams, a popular plank in progressive circles (even if it’ll never happen). Gravel wants to take on the surveillance state and reverse the expansion of the imperial presidency, which became an accepted norm well before Trump.

The former senator isn’t in it to win it, per se, but to make sure anti-interventionist ideals get the airtime they deserve.

Thanks to changes to the primary process, the DNC greatly lowered the thresholds for the debate stage, meaning that someone like Gravel could end up challenging candidates on air. All he needs is 65,000 people to donate to his campaign.

And if the past year has been any indication, even a small group of people stridently supporting a position can have a huge impact on the platforms of other candidates.

UPDATE 1:03pm CT, March 20: According to a Politico reporter, the campaign is the brainchild of a couple of shitposting teens.

He said he'll decide after he meets with the students on if he'll run, but "they need to persuade my wife." I asked him if he knew about the exploratory committee: "They asked me if it was okay, I said they could do what they wanted, as long as they were doing it and not me!"

Splinter spoke with David Oks, who said he was inspired after Gravel’s was mentioned on an episode of Chapo Trap House.

“My friends and I were encouraging him to consider running for president with the idea being that he would not try to contest any primaries, he would just try to get into the Democratic debates.”