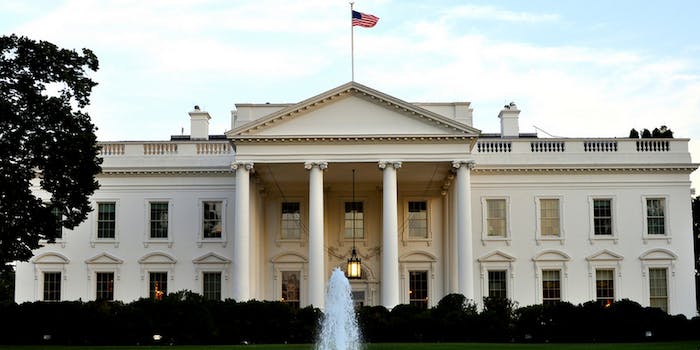 Though a 17-foot-tall robotic giraffe lumbering around the White House might look like something out of the latest Transformers movie, it’s actually part of the Obama administration’s daylong celebration of technology and innovation.

On Wednesday, President Barack Obama hosted the White House’s first ever Maker Faire, an exhibition of America’s “tinkerers, inventors, and entrepreneurs,” whom the president said were a vital part of the U.S. economy.

“New tools and technologies are making the building of things easier than ever,” Obama told the faire’s exhibitors. “There is a democratization of manufacturing that is potentially available because of technology.”

As the Associated Press notes, the Maker Faire caps off a weeks-long push by the Obama administration to emphasize the economy. While Obama said that new technologies are revolutionizing the economy, giving entrepreneurs more opportunities to innovate, he noted that this technology will only help those who are educated enough to use it.

“We’ve got to make sure that more Americans have the skills and opportunities to land a job in a growing industry or to create entire new industries,” he said.

More than 100 “makers” took part in the faire, which is partially an attempt by the Obama administration to help these startups gain attention and market their products. According to the White House, 13 federal agencies are partnering with companies like Etsy and Kickstarter to help entrepreneurs obtain capital.

Exhibitors at the faire ranged from students to seasoned professionals. Antwon Lamon, a high school student from Chicago’s south side, presented a virtual game he created that uses 3D digital design to help a marble navigate a series of mazes. Another group of teens from a low-income school in Philadelphia built a hybrid car capable of getting 100 mpg. The White House also welcomed back a familiar face in the form of John Lawton, a former Marine One pilot who’s found a second calling in Austin, Texas, producing handmade furniture and art installations.

But perhaps the most entertaining part of the fair was Russell, a 17-foot-tall, 2,200 lbs. robotic giraffe created by Lindsay Lawlor, a computer programmer from San Diego. Lawlor took over a year to create Russell, who continues to be redesigned.

Thought the activities of the faire itself were confined to the White House lawn, Obama, in his official proclamation designating Wednesday a National Day of Making, championed innovators across the country.

“Together, let us unleash the imagination of our people, affirm that we are a nation of makers, and ensure that the next great technological revolution happens right here in America,” the president said.

Though not formally hinted at by the White House, the Maker Faire seems to take direct aim at criticism the president and Democrats faced from Republicans during the 2012 election. During that campaign, Rep. Paul Ryan, who was the Republican vice presidential nominee, famously said that America was divided into a nation of “takers” and “makers,” and said the Democratic party championed the so-called 60 percent of American’s who take more from the government than they contribute. The takers vs. makers mantra quickly became a battle cry for conservatives.