Hookups, drugs, prayers, and gossip: The future of Whisper is a customized experience that’s as scandalous as you want it to be.

Last year might’ve been all about the selfie, but so far, 2014’s buzzword is anonymity. Anonymous social apps have taken off in popularity, and secret-sharing app Whisper was first out the gate. Competition keeps getting more intense, with Secret, YikYak, and other startups providing a few different iterations of a similar service. What makes Whisper stand out is the scope of its ambition.

Whisper’s latest update shows it isn’t resting on its laurels—and makes it clear the app intends to go big. Facebook big. What initially looked like a PostSecret knockoff is now a fascinating social network in its own right, and its “Categories” update offers a more customized, streamlined experience of the app that highlights how versatile it is. It’s not just a place for confession; it’s an active, engaged community. People use it to search for motivational quotes, or rant about a shitty boss. They use it to post philosophical questions about Nietzsche, create prayer chains… and find people who want to do coke in a bathroom stall.

After debuting a local-posts feature, Nearby, and hiring Gawker’s viral content sherpa Neetzan Zimmerman as its editor-in-chief, Whisper is now leaping forward with a major reorganization called “Categories” that instills order in the app’s sprawling collection of confessions, invitations, gossip, and aphorisms. Categories offers around 30 core subject-sections users can select to prune what they see on the app. 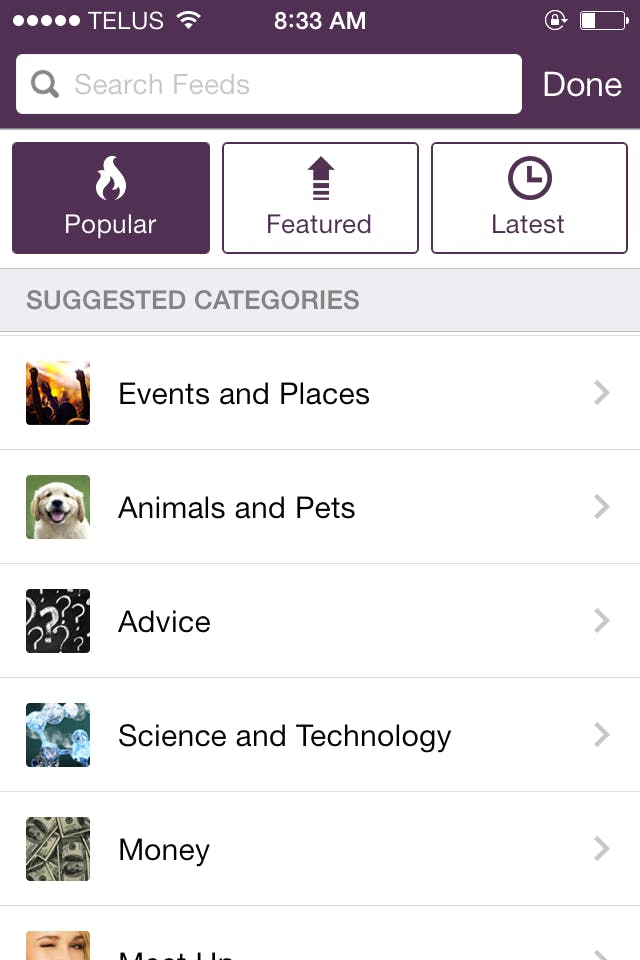 Zimmerman told Daily Dot the company is experimenting with as many as 200 categories, and may introduce more later. You can choose “Faith” or “Parenting” to see more wholesome entries, or go for “NSFW” or “Drugs and Alcohol” if you’re looking for something a little more salacious. And “Meet Up,” one of the categories, could be spun out to a straight-up hookup app in its own right. Users can turn on the “Nearby” feature within any of the categories, whittling down the results to only local whispers.

Before, the app had three main streams of posts, and a keyword search. But the sheer volume of posts can make these feeds hard to navigate. Whisper’s content is more diverse than its competitors, but its design made the app feel unwieldy. This update expands Whisper’s functionality but makes it a more streamlined, manageable user experience.

Introducing the Nearby feature was (up until now) one of Whisper’s smartest moves. It’s exciting to see posts from neighbors; there’s something especially scintillating about reading secrets divulged by people who work, live, and misbehave right around you. That hot tattooed barista might be the one confessing he’s deathly afraid of fire ants, or that sexy guy who always picks up his dry cleaning at the same time as you might be the one who wrote “Anybody wanna meet up? PM me.” It makes users feel like they’re part of a community, like a real connection might be possible.

Besides the community factor, Whisper’s Nearby feature had another side effect: People started treating it like a hookup section. Every day, the Nearby tab is peppered with posts from users who want to make the beast with two apps. There are overt invitations to sex, more casual offers to grab a beer—there are even posts looking for women to act as escorts. It’s a thriving aspect of Whisper, and the app is embracing this slightly seedier side. Tinder has de-stigmatized app-based dating to the point that people are turning the Nearby section into a de facto mobile version of Craigslist’s Casual Encounters, and it’s working. 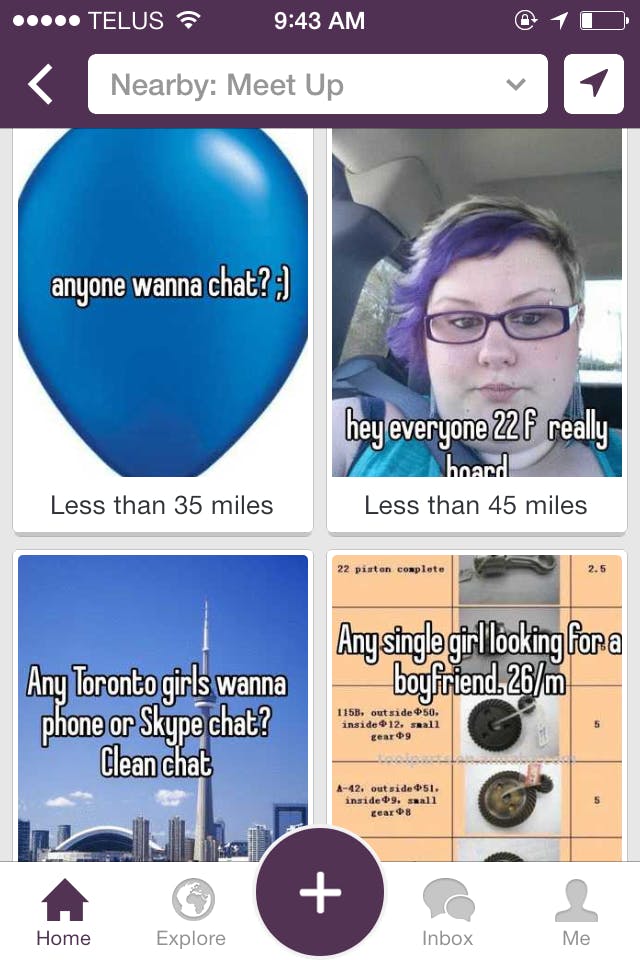 The Whisper team doesn’t want to alienate users who don’t like seeing booty-seeking posts. That’s one of the advantages of this categories update. Users who do want to see this kind of content will have an easy way to seek it out through the “Meet Up” category, but users who don’t want to see it won’t have to sift through winky faces. “When users become interested in that content, it will become available to them, but when they’re not, they don’t have to seek it,” Zimmerman explained. “In that way it will be segmented into non-hookup content and hookup content. But it’s a little bit deeper than that. We’re looking to segment every aspect of the content,” he said. “Whether it’s work or family, military, politics, each get their own area.”

The update isn’t perfect. Zimmerman says Whisper developed an in-house algorithm to determine which category a post should go. “It’s obviously a complicated formula that results in an educated guess, in a way. It improves over time as we go through the process of heightening the categories,” he said. “The way we’re doing that is manually tagging certain whispers into certain categories to learn.” So it’s still in flux, although from initial browsing, there’s nothing overtly misplaced on the updated app.

The other big update is a map in the Nearby section. Users can see what the Nearby section would look like from anywhere in the world, giving them a taste of how people are using the app differently from region to region. From my position in Kensington Market in Toronto, my Nearby section is mainly people looking to hook up or find drug buddies (it’s a pretty shaggy-dog place). From my old neighborhood in Seoul, however, I looked at the Nearby and discovered that most people who use Whisper there are expat ESL teachers, and instead of hookup offers, there’s a heated multi-post debate about whether women should be allowed in the military. I tried the neighborhood I grew up in in Chicago and there was an odd number of posts about single moms and body acceptance, and no drug posts. The feature makes it easy to see how local communities use the app differently.

Whisper is going to have to keep innovating and fighting to stay ahead of its competitors. YikYak has already survived its first major cyberbullying controversy, a sign that it’s becoming a major app for young people. Secret and apps like TenTwenty are slightly more niche, but still want to corner the same local anonymous messaging market. Whisper wants to be a big, muscular, multi-purpose app. The Categories and expanded Nearby feature make it easier to explore the community, and make it clear that Whisper’s potential is huge. If the company can keep finding ways to play up how diverse it is without spinning itself into something hard to navigate, it might do more than keep its lead on competitors—it may be poised to become a social network on par with Instagram or Twitter.