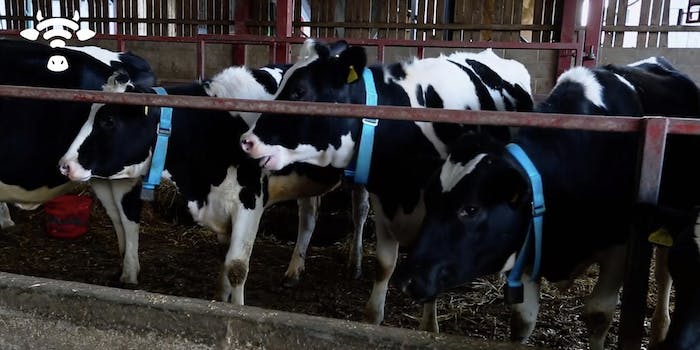 Turn up the Prince and break out the Courvoisier.

In the midst of all the clamor over wearable tech startups—look, here’s a ring that can make phone calls! Here’s an ankle bracelet that tracks your menstrual cycle! Here’s a pair of sunglasses that French-braids your chest hair while playing the 1998 remake of The Parent Trap on a loop!—we neglect to consider another potentially lucrative sector of the wearable tech customer base: animals.

The U.K.-based startup Silent Herdsman, however, is attempting to correct this with their newest product. They’ve just raised nearly $5 million to develop a behavior-monitoring collar—for cows.

The Register reports that the collar tracks and analyzes the behavior of cows, in turn delivering “highly accurate health predictions resulting in improvements in animal health, increased milk yield, and enhanced profitability for farmers on a rapid payback.” If the collar monitors any changes in, say, the cow’s hormone levels, it sends a text to the farmer’s mobile device, which makes it easier for farmers to track their herds’ behavior.

Yet perhaps the collar’s most important function is its fertility-tracking system, which uses heat-sensing technology to calculate when a cow’s estrogen levels are highest for artificial insemination. Put simply: the hotter the cow, the more likely she’ll be able to conceive. During this time the collar can send an alert to the farmer to let him know its to turn up the Prince and start the party.

Although this technology sounds somewhat esoteric, there’s apparently a huge market for such a product. There are an estimated 1 billion dairy and beef cows worldwide, and that number is rapidly growing as countries get wealthier and the demand for beef and dairy increases.

So does this magical cow fertility-tracking collar actually work? According to customer testimoonials (their words, not mine), it does, with one farmer rhapsodizing about how the collar allows him “to budget my insemination costs more efficiently in the future with accurate prediction day one.” So if you, too, are struggling with efficiently budgeting your cow insemination costs, grab your Silent Herdsman collars today.