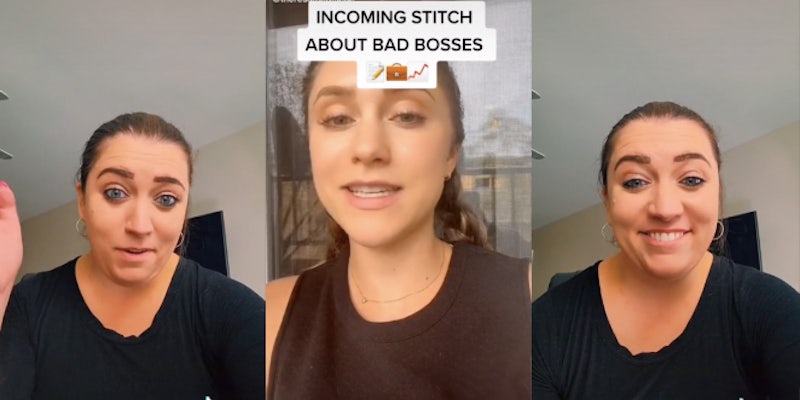 ‘I wasn’t even worth a livable wage’: Worker calls out $5,000 raise compared to executive bonuses at her company

She said the profits generated didn't match the money she was offered.

TikTok user Angela Buccellato (@theresumerescue) blasted management at her former staffing company, saying while they received bonuses and new cars, she only received a $5,000 pay increase. That came even though she claimed to be responsible for the company’s increased profit.

“I wasn’t even worth a livable wage,” Buccellato said in her TikTok.

@theresumerescue #stitch with @coach2elevate I still can't believe this happened, but I make it my mission to make sure this doesn't happen to anyone else #careeradvice #newjobcheck #badbosses #firstjob #recruiting ♬ original sound – theresumerescue

When Buccellato first started with her former company she said she was making $30,000 a year, but was promised a raise if she did well.

“I put my head down for the year, I made the company half a million dollars in profit, which was very big for a small staffing agency,” she claimed. Buccellato explained in her TikTok that it felt like a punch in the face after she asked for a raise and went from making $30,000 to $35,000.

She decided to join a different company and faced backlash from her boss when she tried to put in her two weeks notice. According to Buccellato, she was “belittled” for two hours by the president of the company, telling her she would go nowhere in her life.

According to Buccellato, her former boss refused to accept her two weeks’ notice and told Buccellato to think about it before she made a decision. After 20 minutes, she went back to her boss, still confident in her decision to leave the company.

Buccellato then explained that her boss sent an email to the entire company telling them that Buccellato quit because “she didn’t have the ability to grow into a management position.”

Buccellato explained in her TikTok how upset she was by the email because her boss lied about the reason for her leaving to the entire company.

“That’s not at all what I said. It was a male-dominated company,” she explained. “I was one of two women in my department.”

One of Buccellato’s big issues with the company was that there was little room for advancement. “There’s nowhere for me to go unless everyone dies.”

Buccellato explained that she felt there was no clear career path at the company and she would be stuck working in recruiting forever.

“And I had bigger goals than that,” Buccellato explained.

To make matters worse, when Buccellato decided to leave her company, a male coworker told her he was making $18,000 more than her. “And he didn’t even have close to the numbers I did. He told me that,” Buccellato said.

Not only was Buccellato frustrated that she was being underpaid, she saids she was frustrated that all the men in her department were being paid way more and she didn’t even know it.

Buccellato received an overall positive response from her TikTok, with some users sharing their own “bad boss” stories and others in shock over the way she was treated.

“I would have hit reply all and just said ‘that’s not what I said’ and then packed up my stuff and left that day,” one user commented. Buccellato responded, “I was a baby and should’ve done that, but didn’t!”

Another user commented saying how much she resonated with the TikTok. “The part about the old white males. Couldn’t be more true, it’s so sad. I think as younger women we have all been there unfortunately.”

Buccellato did not go into details on the industry her company was involved in but did say in a follow-up TikTok that she believes the company is struggling and she has heard of people being laid off and the company losing contracts.

The Daily Dot reached out to Buccellato via Instagram direct message.

Rebecca Caraway is a FOIA intern for the Daily Dot. She's currently a journalism senior at California Polytechnic State University in San Luis Obispo. When she's not in class or working on her school paper you can find her at the beach or watching her favorite sitcoms.