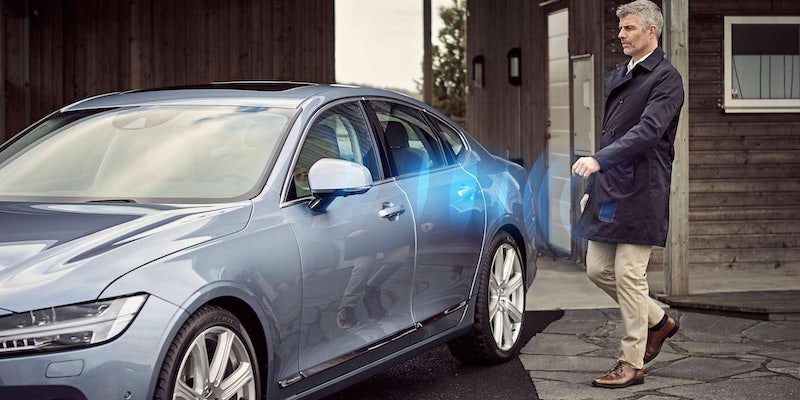 Lending your car to a friend could be as easy as sending a text. That’s the future Volvo is imaging with its smartphone app that enables keyless entry for the driver—and anyone with permission to enter.

Announced earlier this year and now prominently on display at the New York International Auto Show, the app does away with key fobs and puts the key right on the user’s phone.

Using the device’s Bluetooth capability, the app can do just about everything that a standard key could do—from unlocking the doors to popping open the trunk to even starting the engine of the vehicle without turning the ignition.

Beyond just convenience for the primary holder, the Volvo app also allows others to take the wheel without requiring a physical key. Users are able to grant digital keys to others, allowing them temporary or ongoing access to the car.

The process requires just a few taps, and the recipient of the digital key is provided with all the relevant information they’d need to know about the car: the make and model, where it’s located, and how long they will be able to use the vehicle.

It’s a relatively simple innovation—keyless entry isn’t new, and a smartphone app seems like the logical evolution of the feature—but it does present some interesting usage cases in the future. For the average person, it just makes it easier to share possession of a car, but community cars and ride-hailing services could conceivably spring out from this development.

Ideally, the phone and Bluetooth connection would provide a more secure means of communication between device and vehicle and may be able to avoid those concerns, but the risk of hacking is always present once you go digital.

That’s all a little down the road, though; Volvo is testing the app at the Gothenburg airport in Sweden with car-sharing firm Sunfleet. Commercial versions of the service won’t be available into 2017, and only with limited availability—and of course, physical keys will still be available for those who want a new car but fear change.